Years before I wrote my own book about perspective, I was experimenting with pushing its outer limits. I was inspired by seeing Buckminster Fuller’s dymaxion world globe projected onto the sides of a twenty-sided polyhedron to try the equivalent in perspective- an entire 360° visual field as seen from one point in space drawn onto twenty triangles to form a continuous image. I did a couple of early drawings using this method, including a fold-up ornament sent out as a Christmas card in 1993.  Eventually I got tired of the difficulties involved- each of the twenty triangles has its own perspective, and it’s extremely difficult getting objects to line up over the gaps- and I figured out that it would be simpler to draw a continuous image on a spherical surface. I got a wooden ball from a crafts store and drew a 360° perspective grid on it- basically a picture of a cube with ruled lines on it, viewed from inside so that six vanishing points each line up with the center of a face. Here is an example of a ball ruled with perspective lines. Over that I did an acrylic painting of the garden on the roof of our loft building in New York and gave the finished piece to Eve as an anniversary present in 1994. This post shows the picture of the ball- as you can tell from nearby objects, it is quite small, only about one inch square.

At the time I thought I was the first person to have the idea of projecting perspective onto a spherical surface, but l have since learned that an artist named Dick Termes devised what he calls “Termespheres” in 1968, and he has been doing them ever since.

Perspectively savvy readers may point out that an image covering 360° ought to include parts of the artist himself- but  if  I were to go that route, more  than half of the image would logically need to be of the inside of my eye socket, so l decided to conceive of myself as a disembodied point in space. Others may object that my painting could only approximate the retinal image if it were painted on the interior of a sphere and viewed from the center, and they would be right, but l didn’t happen to have a ball large enough to get inside of (still don’t, in fact), and actually, the sphere does provide a compelling illusion of an actual view- as one turns it in the hand, it looks remarkably as if one were panning around an actual scene with a wide angle lens. You can view an immersive panorama of the piece here (Shockwave viewer required).  My friend Tom Lechner, whose own photographic panoramas are viewable here stitched it together from multiple photographs of the original. If the style seems sketchier than usual, do remember I was painting on a surface little over three inches in circumference. Note the inscription to Eve at the bottom. 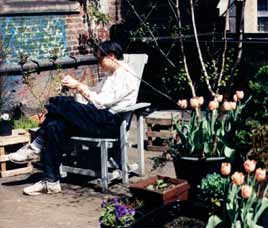 Here is a photo from  that  time of me relaxing in the garden. Since Eve and I lived on the top floor, we had direct access to the roof, which was one of the nicer features of our life in that apartment (where we lived in from 1988 to 1995, before moving to Portland).