Stop the presses! I have actually sold a piece of original art! (Of course, I have been a working artist for over thirty years now, but as an illustrator and cartoonist I create art to be reproduced and no one much has been interested in owning the originals). A submission I made in January to The Visual Chronicle Of Portland, a city-owned collection of works on paper– prints, photographs, paintings and drawings– that focuses on artists’ views of the city’s social and urban landscapes- has been accepted, and at some point soon it will go on display. No black-tie gala planned for this year’s inductees, who also include Justine Avera, Kevin Farrell, Jason Greene, Bruce Hall, Alex Lilly, Francis Rosica and Jake Shivery, but there is a nice check and the satisfaction of seeing my work hanging somewhere besides on a telephone pole (the works are exhibited in publicly accessible areas throughout City and County offices).

The drawing depicts a recently installed fountain complex at Irving Park, which is a few blocks from my house. Like my world globe and bowling ball paintings, it depicts a 360° field of view as seen from a single point in space, but instead of painting the view onto a sphere I have transposed the view onto a sinusoidal projection such as is often used for world maps. 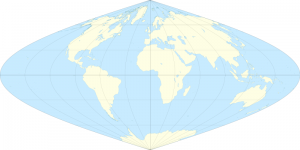 The method I used for constructing the image is the same as that for spherical paintings; I start by taking a lot of reference photos at the scene, then I load the pictures into Lightwave, a computer animation program, where I assemble them into a three dimensional digital collage, roughly spherical and facing inward, like a geodesic dome made of snapshots. I place my virtual camera at the center of the dome and rotate it to render a number of views which I then transfer by a grid method to the final image. Here’s one of the renderings from Lightwave:

Clear enough? Since flat art is easier to display than spherical objects, I’ll probably be doing more of these map projection pieces. Next up: transverse mercator!