This comic page from early 1995 is not exactly for hire, since I was working from my own concept rather than a client’s, but I put it in that category anyway because I was paid money for it. I had been a regular illustrator for The New York Press for about a year when they started a feature called Comic Of The Week; this little piece of satiric fantasy (the kind of thing Steve Brodner does in his sleep) was the first and only concept I was able to sell them before I left New York, and the paper, later that year (I was told the editors only wanted to work with New York-based artists, but within a few years they dropped that policy and l was able to work for them again).

At the time, Rudolph Giuliani had been mayor for about a year but was already looking like a favorite to win a second term; as a loyal Democrat this was my way of looking fondly ahead to his assumed future as a political has-been.

Fourteen years later, some of what I predicted has come to pass: Rudy would unsuccessfully run for President, he did host his own radio talk show (a clip from which would come back to haunt him during his Presidential run) and a Republican politican would eventually star on Law And Order (how was I to know it would be Fred Thompson?).

Some things I failed to foresee: 9/11, that whole soap opera where his wife and mistress were fighting over who got to sleep in Gracie Mansion, and the day Rudy would eventually ditch the combover to go honestly bald.

You can see a larger version of the piece as well as a color sketch for it at Comics Lifestyle. I was asked to limit my color palette to six including black; I wound up doing six versions of the art, an original and five differently blackened photocopies. 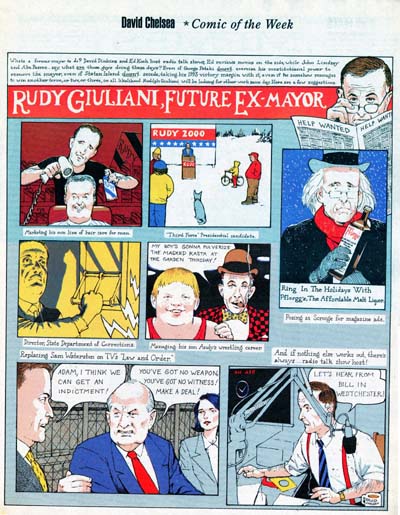