I drew my thirteenth 24 Hour Comic last weekend on International 24 Hour Comic Day, October 1, 2011. at DIVA, The Downtown Initiative For The Visual Arts in Eugene, Oregon (my first ever 24 session outside Portland). 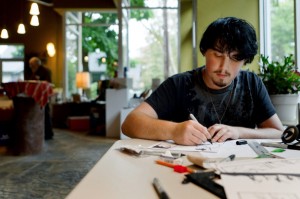 Saturday’s session took place in the downtown gallery space of DIVA. I was one of ten artists, almost all of whom were doing the challenge for the first time. I have only been able to find one picture from the event online; it shows my fellow participant Mirkan Schoolcraft hard at work. Below it is a picture of me from another 24 Hour Comic Day event a few years back. The event got a lot of ink in the local press- below are links to a story in the University of Oregon student paper the Emerald and two in the Eugene Register-Guard: 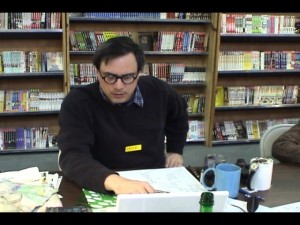 story by Bob Keefer in The Eugene Register-Guard.

story by Winston Ross in The Eugene Register-Guard

story by Baylea O’Brien in The Oregon Daily Emerald

This latest story is pretty much plotless, a tour through my personal “Memory Palace”, which is a technique I use for remembering things- say, the items on a shopping list- by mentally placing them in the rooms of an imaginary building. I learned about memory palaces from the recent book Moonwalking With Einstein by journalist Joshua Foer, which recounts a year he spent training for the US Memory Championship.

Since I ran out of memory palace items several pages short of the full 24 (actually 23, since I inadvertently skipped page 16- oops!), I filled out the story with a list of The Presidents Of The United States in numerical order, using a cipher system to convert their numbers into memorable words (for example, James Buchanan has a tail because he is the 15th President, and in this cypher system 1 is represented by “t”or “d” and 5 is represented by “l.”).

Many thanks to Eric Ostlind of DIVA for opening his space to us, and especially to Ken O’Connell of U of O and Copic Marker for providing not just refreshments and art supplies (my story was drawn on pre-ruled manga board), but also a place for me to sleep the night before the event. 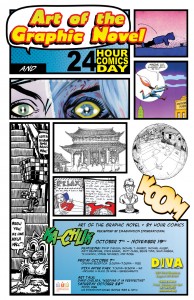 And don’t forget The Art of the Graphic Novel + 24 Hour Comics exhibit at DIVA, which runs from October 7th through November 19th. The opening reception is tonight from 5:30-7:30pm.