This new book by Polina Olsen is pretty self-descriptive; it’s about Portland (Oregon, not Maine) in the 1960s. I grew up in Portland, and my memories of that decade are fairly sharp, since I was drinking my Kool-aid without acid in it, but they are mostly of stuff like Saturday morning cartoons and those weird old exhibits at OMSI (Oregon Museum Of Science And Industry) rather than the student protests and psychedelic concerts that this book covers (I knew many of the prominent figures in the book, like Psychedelic Supermarket proprietor Emery Ingham, the artist Henk Pander, Outsider-In founder Dr. Charles Spray, and Storefront Theater co-founders Tom Hill and Anne Gerety, because their kids went to the same school I did, the Metropolitan Learning Center; Portland’s counterculture was a pretty small scene compared to Haight-Ashbury or the East Village).

David Chelsea is reading:
More Baths Less Talking: Notes from the Reading Life of a Celebrated Author Locked in Battle with Football, Family, and Time
by Nick Hornby

My own contribution is the last illustration in the book, a 1976 flyer from the radical feminist coffeehouse Mountain Moving Cafe (a bit late for the timeline, but the 1960s lingered longer in Portland than most places). It’s odd that my work represents Mountain Moving Cafe rather than the Storefront Theater, where I was a performer and poster artist for several years, because I wasn’t much of a radical feminist, and only went there once in my life, though it was a memorable occasion- I shared my first kiss at a party celebrating the Fall of Saigon, which should tell you all you need to know about the company I used to keep. 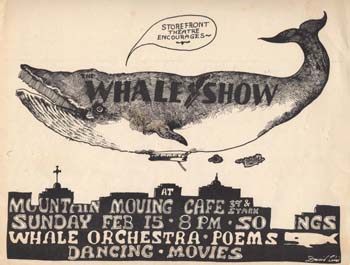