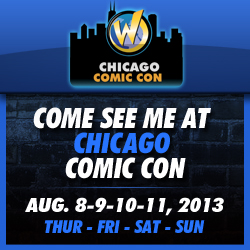 Calling all Chicago-area fans! I had meant to post about this some weeks ago, but I always fall behind on this blog in the summer. My second comics convention appearance this year will be at Wizard World in Chicago starting one week from today, on Thursday, August 8th 2013. I’ll be selling copies of my books and original art and presumably meeting new people, and if I at least break even I’ll do it again next year.

A stellar lineup to be sure, but please drop by my table (B35!) in Artists’ Alley first, and check out this panel on Thursday:

As an artist, writer, actor, musician or creator, there is nothing more challenging than the development of the creative process. Is art birthed from the spontaneous or is it a result of a carefully crafted rhythm and structure? In this panel, esteemed creators, David Chelsea (Snow Angel; Dark Horse Presents; Welcome to the Zone), Trevor Mueller (Albert the Alien; Reading with Pictures), Dan Parent (Archie; Betty and Veronica; Sabrina the Teenage Witch), and Rob Prior (Spawn; Deep Space 9; Evil Ernie; Heavy Metal) describe how to overcome creative obstacles and share their keys to unleashing creativity. Moderated by Tony Kim (ROOM 42)