The twentieth anniversary of my book PERSPECTIVE! FOR COMIC BOOK ARTISTS is fast approaching , and it’s time to take care of some long-unfinished business.

The reason this is wrong, wrong, wrong, have to do with the effect of foreshortening. Yes, a sphere always does appear as a circle in the real world, where we view everything head-on. But when we look at an image in perspective, we only see the central part of the picture head-on; everything else is seen from an oblique angle. To compensate for foreshortening, a sphere that is not exactly at the center of the picture must be drawn as an ellipse in order to appear circular, and the further from the center it is, the more distended the ellipse has to be.

Most books tell you to ignore this effect and draw spheres as circles wherever they appear for aesthetic reasons (though I suspect there is some laziness involved as well); some go so far as to term this compromise of the rules as “correcting an error”: circles are pleasing and natural, ellipses are disturbing and gross. However, cameras as well as CGI software have a philistine insensitivity to aesthetics, and a sphere photographed off-center will appear uncompromisingly elliptical: 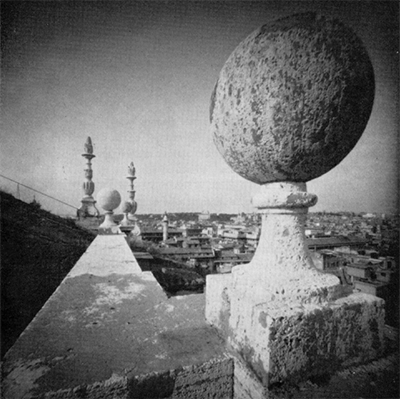 I have two methods of constructing a correctly spherical ellipse anywhere in the picture, and to demonstrate them, I will play cop on this one-point perspective image by the 16th century Dutch artist Hans Vredemas de Vries. Beautifully drawn, and literally a textbook example, since it shows up in a lot of textbooks, it was on the ad for the first perspective course I ever took, and it’s wrong, wrong, wrong! 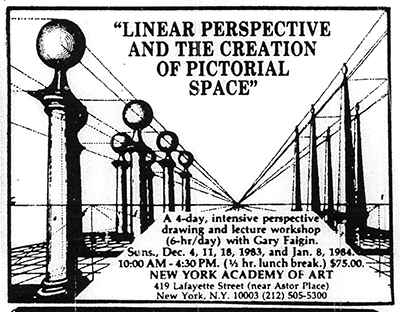 My first method involves building a boxy shape to fit the sphere in, then drawing three intersecting circles which provide tangent points to plot the silhouette of the sphere. Here’s an isometric drawing of the shape I intend to draw: 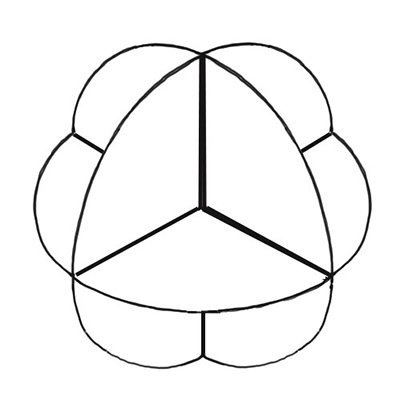 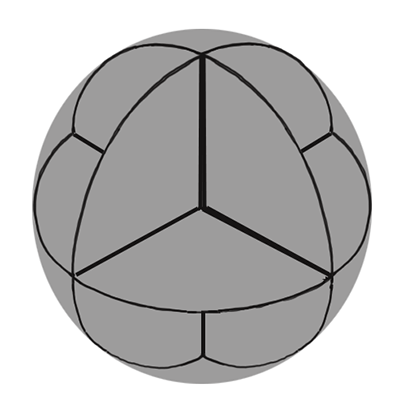 De Vries has already done much of the preliminary work; in his picture there is a horizon, a central vanishing point, and two 45° vanishing points for the diagonals. I can even use his existing sphere as one of the three intersecting circles; since it is facing us, its shape is not distorted. All I need to do is add a square outline and two lines crossing the midpoint. 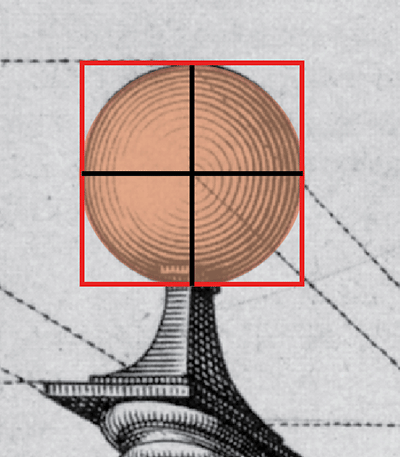 Now, I create a green square intersecting the red square horizontally, using a line back to the diagonal vanishing point to establish its depth: 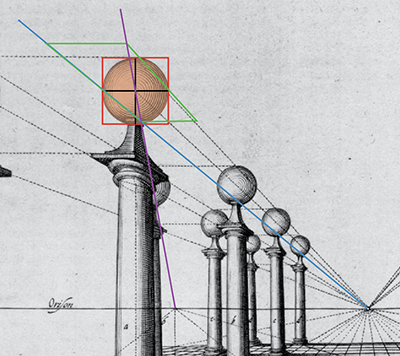 Then I inscribe a circle in perspective- that is, an ellipse- in the green square. I’m working in Adobe Illustrator, so I create an elliptical box and fit it in the square so that it touches the midpoints of all four sides. If you’re working on paper, you may want to use the 12 point method for inscribing a perspective circle in a square. 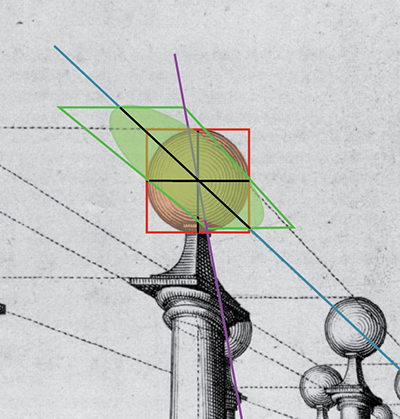 Now I repeat the process for a vertical square in the receding plane, building off the two squares already drawn. 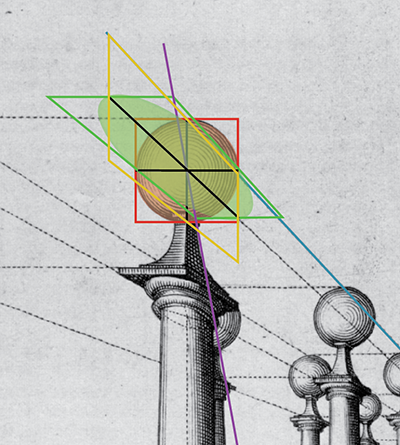 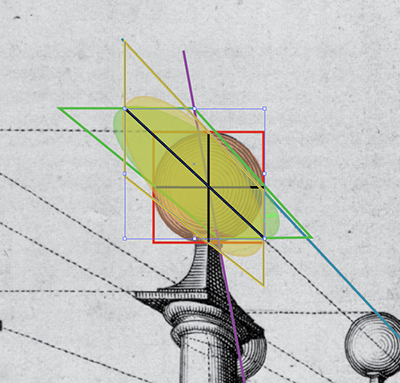 Now I have three differently colored circles. An ellipse that is tangent on all their outmost edges gives us the outline of the sphere. Because it is far from the center of vision, it is VERY distended: 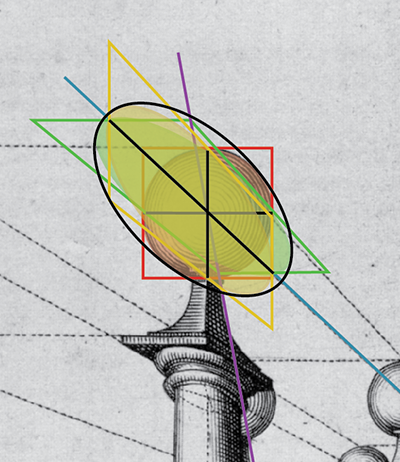 I stretch de Vries’s sphere to the right shape, and the job is done. 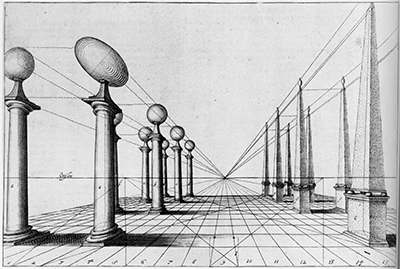 For a second sphere, further back in space, I use a method I outline in EXTREME PERSPECTIVE! for drawing anamorphosis, which is an image meant to be viewed at an extremely oblique angle (the same method, with slight variations, also works for drawing cast shadows). First, I find the station point, a spot directly below the center of vision exactly as far from it as the observer is from the picture plane. Again, de Vries has made this easy; the distance to that spot happens to be exactly the same as the distance between the central vanishing point and either of the two 45° vanishing points.The station point and the two 45° vanishing points form a right triangle, with the 90° angle on the bottom: 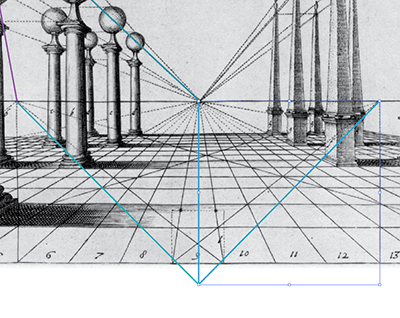 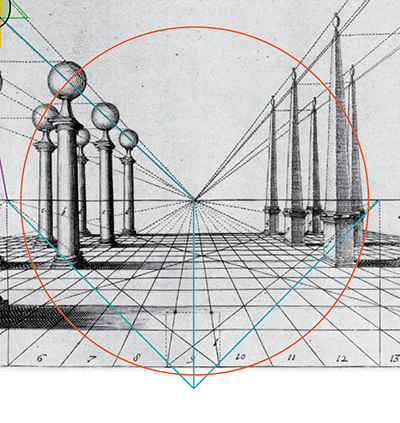 I can use a protractor to determine the exact cone of vision the sphere sits on, but I don’t need to- all I need to do is establish a point on the horizon exactly 90° away. I find it by first drawing a line from the intersection point on the horizon to the station point, then drawing another line at right angles to the first and marking where it intersects the horizon. 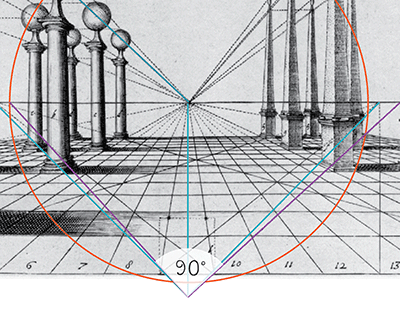 Next, I take a circle the size of de Vries’s sphere and place it on the horizon with its center on the cone of vision. I draw tangent lines from the station point on the circle, marking where they intersect the horizon, and then erect vertical lines from those points. 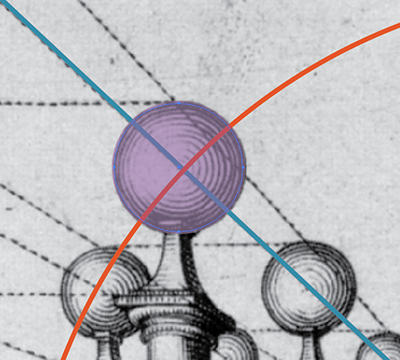 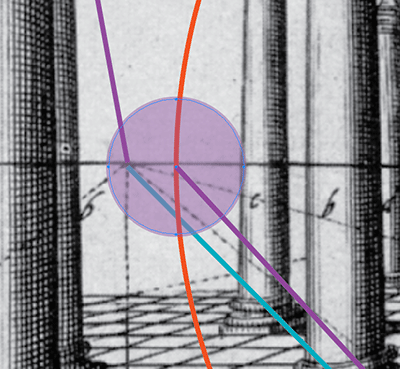 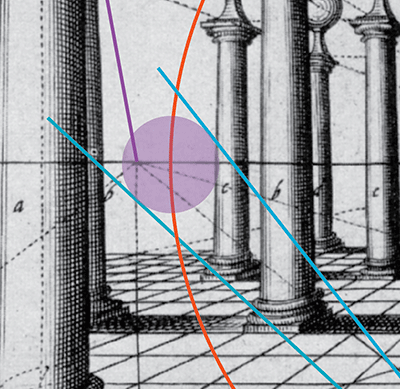 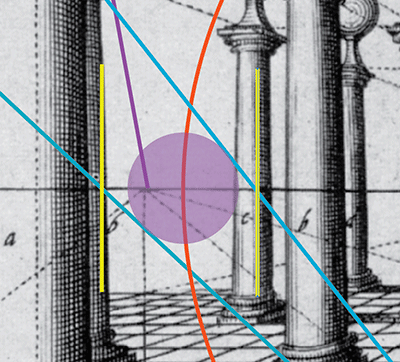 Now the point 90° away gets into the act. Lines drawn from that point, touching the circle, complete a square in perspective which has a trapezoidal shape. An ellipse touching the sides gives us the shape of the sphere. Since it is closer to the center of vision than the first sphere, it is not quite so distended. 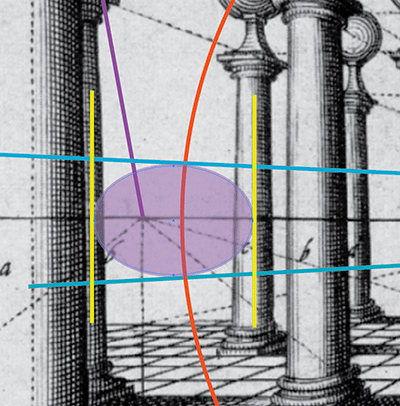 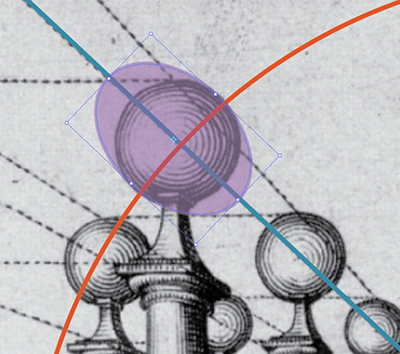 A little Photoshop magic, and de Vries’s errors are corrected: 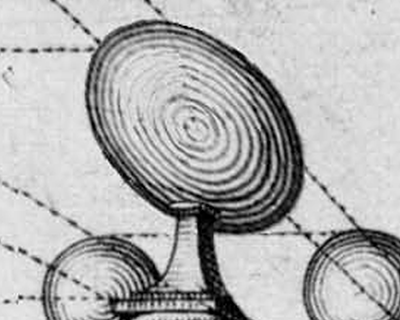 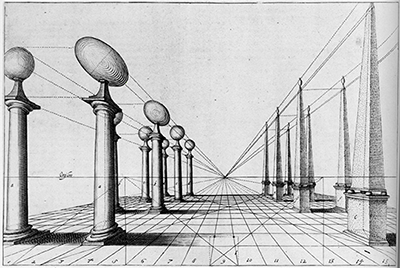 Some day when I have time, I’ll get around to correcting the rest of the spheres..

Got an example of iffy perspective to show? Be a whistleblower! Send an e-mail to me at davidchelsea(at)comcast(dot)net and include Perspective Police! in the subject line.