First off, we are talking about NEXT Halloween. I have just had my second Snow Angel story accepted by DARK HORSE PRESENTS, which is set to appear in the October 2015 issue.

David Chelsea is watching:
In The Realms Of The Unreal
featuring Henry Darger


This is an eight page adventure set at Halloween. The little girl who becomes the superhero Snow Angel when she makes an angel in the snow is off-duty for the night, trick-or-treating in a Headless Man costume, but there are plenty of other Snow Angels around: 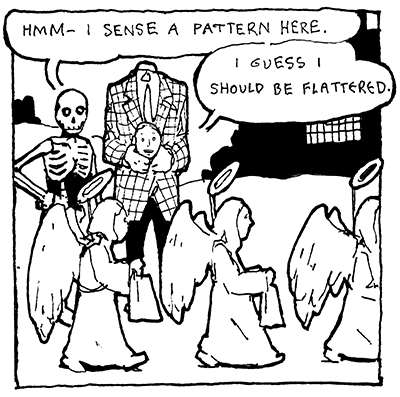 BTW, this story is being colored by the very gifted Jacob Mercy, who is doing an excellent job of digitally replicating the watercolor and airbrush style of the first Snow Angel story in Photoshop. Here’s a finished panel, in which it seems Snow Angel has found a reason to show up after all:

Jacob and I are working on a number of other Snow Angel stories, with the aim of an eventual book-length collection.