This week’s two page installment of my new webcomic ARE YOU BEING WATCHED? gives us our first glimpse of the devils’ office that Mugg goes to in order to sell his soul. I meant to give it a shabby look reminiscent of Jimmy/Saul’s cramped workspace on BETTER CALL SAUL, as well as the dingy linoleum offices of Ben Katchor’s JULIUS KNIPL strip. 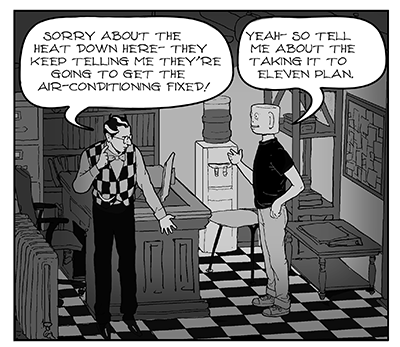 (By the way, the “Taking It To Eleven Plan” refers to the number of wishes the devil grants Mugg. In the original 24 Hour Comic version of this story, the devil grants Mugg seven wishes, each of which puts Mugg on a different Reality TV show. I expanded it to eleven simply because I wanted to include more shows).

Since I knew we would be spending a lot of time there, I built a CGI set of the office in Lightwave (mostly using furniture models downloaded from free sites), loaded placeholder models in position for Mugg and the devil, and traced over the renderings.

That CGI office comes in handy for doing stunt shots like this overhead view: 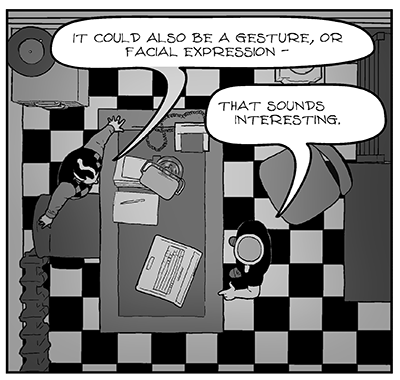 Also today, since it’s the Fourth Thursday Of The Month, I’ll be doing another live video hangout at 3 pm PDT. I skipped May’s hangout because I had company in from out of town, and in June it was over 90° in the studio that day, way too hot to work, and I quit early. Today promises to be only in the low 80s, so I’m going to try again. I think I’ll do a demonstration of going from line art to full grayscale in PhotoShop: 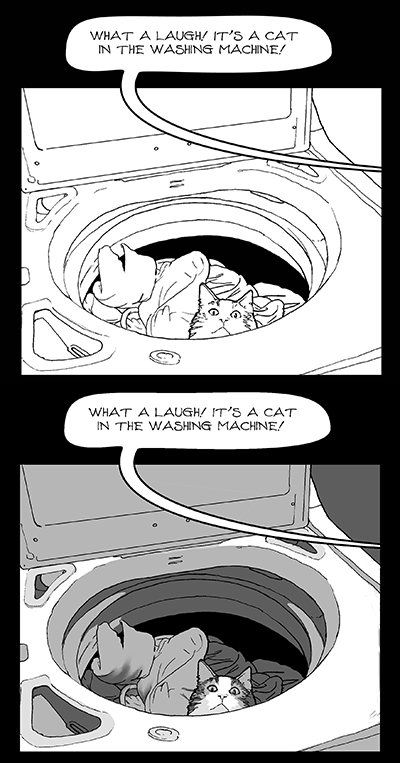 Once more, I will be doing this through Google Hangouts, and sending invitations to people who are interested through Google plus. If you’d like to be part of it, get in touch with me through this website and let me know.