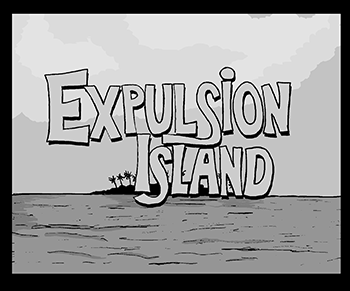 Another week, another two pages of my continuing web comic ARE YOU BEING WATCHED? on Patreon. This story features parodies of various popular reality TV programs, and this week I take on the Big Kahuna– Survivor, just in time for the premiere of the current season next Wednesday. In the story, Mugg finds himself on the popular program Expulsion Island, where he meets and falls in love with Mandy, who is another contestant. 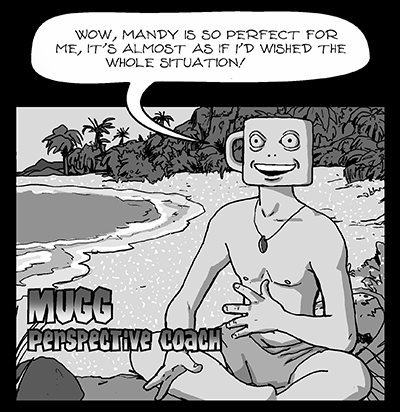 You might assume that I am one of those people who think Reality TV is The End Of Civilization, or The Death Of Entertainment, or A Sign Of The Coming Apocalypse– in any case, something that must be erased from the culture before it’s too late. You couldn’t be more wrong. I LOVE Reality TV. Given the choice, I would almost always rather watch something like Hoarders or Face Off than Game Of Thrones or Mad Men, or whatever sitcom people are talking about at the water cooler. Why? Well, despite the fact that I consider myself a professional entertainer, I actually think that most of the time, people are more entertaining when they are caught in the act of being themselves (the pioneering reality show Candid Camera happens to be the first non–cartoon program I can remember enjoying). 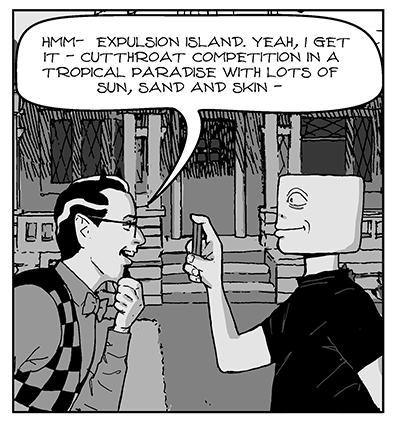 For the most part, programs I spoof in ARE YOU BEING WATCHED? are the ones I watch and enjoy myself, and Survivor is a prime example. My wife and I have watched every season since the first one in 2001, and we now make it a family ritual, inviting my mother and sister over to watch every Wednesday night. My favorite contestants over the years include Kimmi Kappenberg, the airhead vegetarian (now back on the current season), Russell Hantz, the slimy oil millionaire who schemed and backstabbed his way to the finale, only to win not a single vote from the jury, John Cochran, the pasty-faced college kid who had written his dissertation on Survivor, and who won the big prize on his second attempt, then parlayed his TV fame into a job writing for The Millers, and the lovably piratical Rupert Boneham. Of course, in the coming season I am rooting for Spencer, the University of Chicago grad, who is returning for his second go-round, because he was my nephew Ivan’s roommate at the University of Chicago.

Also, because it is the Third Thursday of the month, I am posting Secret Stash material on my Patreon page. This week, it’s self-portraits on envelopes, like this anaglyph image: 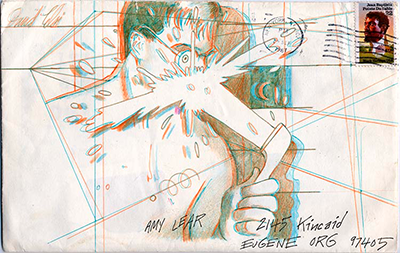