The Third Thursday of the month is when I post Secret Stash material to my Patreon page; sketchbook drawings, old decorated envelopes, and other ephemera. This month I have a gallery of reference photos shot for my first graphic novel DAVID CHELSEA IN LOVE.


Drawn between 1989 and 1991, DAVID CHELSEA IN LOVE is set a decade earlier, and recounts my failed romance with an actress I call “Minnie Maurier”, as well as flirtations, one-night stands, and short affairs with a half-dozen other women.

The events in the story largely take place in Portland, while at the time I was working on the book I was living in New York. It was important to me to include specific and recognizable locations in the story, so I needed visual reference. Nowadays I would be able to gather all the material from Google Street View and Google Images, but at the time visual reference for Portland, Oregon was not easy to come by in New York, so I was obliged to shoot my own. Fortunately, my family and many of my friends were still living in Portland, and I brought my camera along on visits home.

Each photo in this series is paired with a panel from DAVID CHELSEA IN LOVE. Though I was trying to evoke the early 1980s, my photos wound up being a time capsule of the early 1990s. Here, I backdate a 1990s photo to 1980 by adding a street sweeper cleaning up ash from the Mt. St. Helens eruption, without bothering to change the cars to what actually would have been on the road that year: 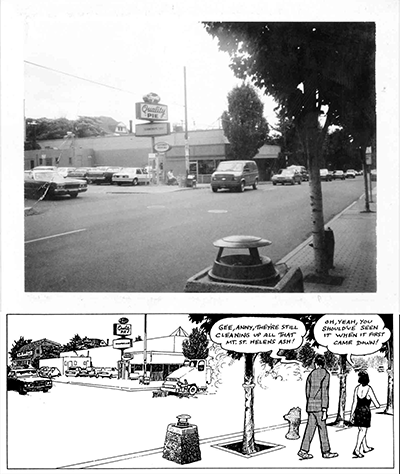 Many of my photos were shot with a vintage Kodak Stereo (a gift from my very tolerant and forbearing wife, Eve). This shot of the street sculpture familiar from the “Expose Yourself To Art” poster became part of an acid trip sequence (Note the Tom Peterson stencil on the trash can- that was really more of a 1990s thing):

Parts of the story take place in New York, so I shot reference photos there as well. Judging from the movie names on the marquee, this must have been taken in 1982, so it appears I used an existing photo from my files for this panel: 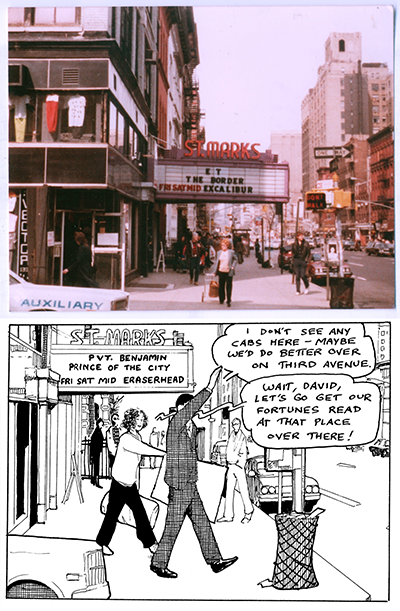 Curious to see more of DAVID CHELSEA IN LOVE? It’s out of print, but you can buy a copy from Amazon: 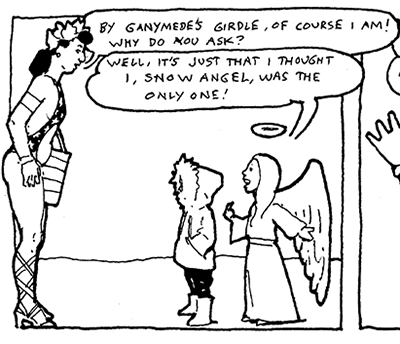 In this episode, Lady Goddess introduces Snow Angel to an entire team of crime-fighting superheroes, The Congress Of Crusaders: 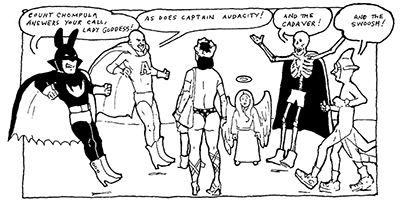