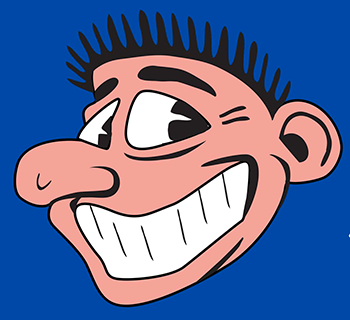 
First up is Rose Quartz, from the animated series Steven Universe. This character made news recently when a fan artist, stung by online criticism that her drawing made the character appear too thin, attempted suicide. The sad details are here.

For my own version, I adapted a piece of art featuring another plus-sized redhead, the calendar pinup Hilda, painted by Duane Bryers:

Next, a sketchbook drawing from 2009. A fan at a convention wanted a sketch of my favorite Tintin character. I chose the lookalike detectives Thomson and Thompson:

To put a little different spin on things, I depicted the characters with apples in front of their faces, a favorite motif of Tintin creator Hergé’s countryman, the Belgian surrealist René Magritte: 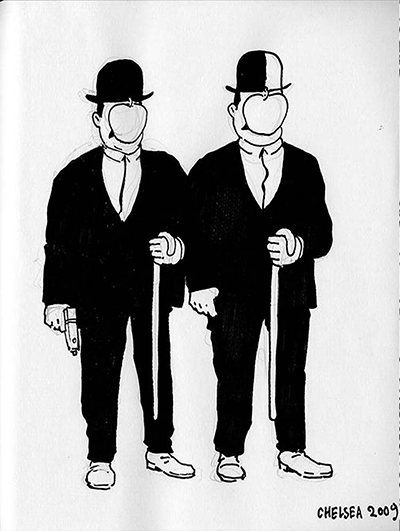 Cartoonist and illustrator Rick Geary is one of the top four artists in my personal comics pantheon (the others being Winsor McCay, R. Crumb, and M.K. Brown) Most of Rick’s work these days is about true-life murder cases and historical figures like Trotsky and J. Edgar Hoover, and he rarely draws continuing characters. One exception is the turn-of-the-century liberated woman Blanche, featured in a series of three comics by Geary:

My own drawing puts Blanche into a period-appropriate setting, the 1911 painting September Morn by Paul Émile Chabas: 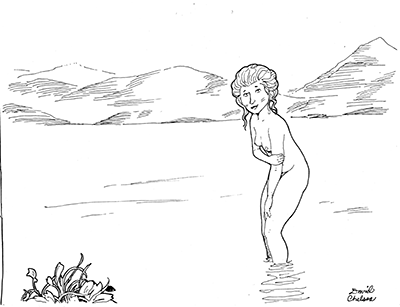 M.K. Brown is another distinctive stylist who doesn’t usually draw continuing characters. Probably her best-known is Aunt Mary, star of the monthly strip AUNT MARY’S KITCHEN, which ran in the National Lampoon in the 1980s: 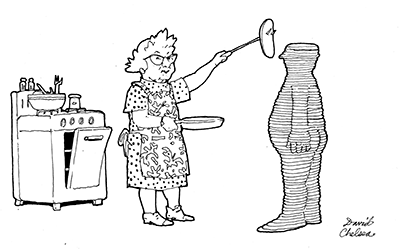 R. Crumb, on the other hand, has created a small army of continuing characters, many of whom he has been drawing since the 1960s (of course, these days he mostly draws himself). One of the most persistent, if not popular, is this guy, Mr. Snoid:

Crumb is most identified with San Francisco in the 1960s, but he did live for a time in Cleveland (where he met both his first wife Dana, and Cleveland’s true comics laureate, Harvey Pekar). Since Crumb can be considered a hometown boy, I decided to slightly redesign Cleveland’s logo to honor his Snoid character (and as an incidental benefit, remove all taint of racism): 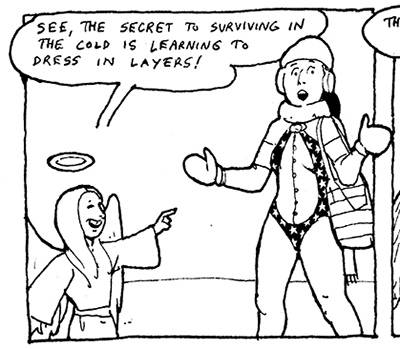 Meanwhile, on the Spencer watch, the tribes on Survivor: Second Chances merged on the last episode, after which Spencer found himself a swing vote between two factions, led on one side by Savage, and on the other by his old nemesis “Chaos Kass” McQuillen, from Survivor: Cagayan. Spencer had the chance to repay Kass for saving him from the chopping block the previous episode, but instead he voted with the Savage faction, and Kass’s torch was snuffed.You do what you have to do.