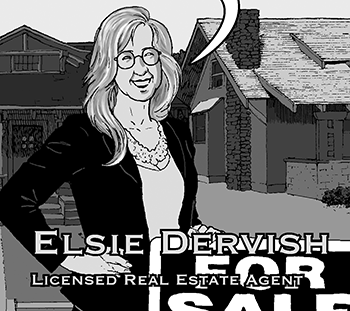 This week on my Patreon page: after a sixteen-page SNOW ANGEL break, we return to my serialized webcomic ARE YOU BEING WATCHED? with two new pages. To recap, Mugg has sold his soul to the devil in order to get on Reality TV to impress Mandy, the girl of his dreams. In the latest episode, Mugg and Mandy become a newlywed couple hunting houses on the program Nest Quest, hosted by Licensed Real Estate Agent Elsie Dervish.


This kind of program was epidemic during the housing boom of the last decade, but it never really went away. The British comics Mitchell and Webb nicely boil it down to essentials in this sketch. 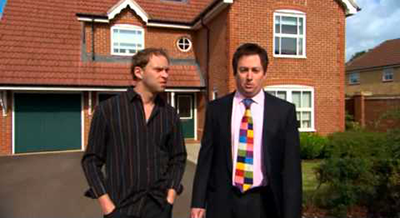 Attentive readers will notice that the host of Nest Quest sports a pair of round black glasses: she is meant to be the devil in disguise. A bespectacled devil clone appears in each of Mugg’s Reality TV adventures, sometimes as the host, sometimes in another guise. That the cartoonist behind this comic also wears round black glasses is no coincidence.

In roughs I drew the real estate agent as a man, but then I decided it would be more inclusive, as well as fun, to make the character a David Chelsea in drag with fabulous streaks n’ tips (more true to life as well; most of the realtors I personally know are women). I also think it makes the scene more pointed; Mandy has a very particular use in mind for the first floor closet, which the realtor instantly picks up on, while Mugg is left in clueless male befuddlement: 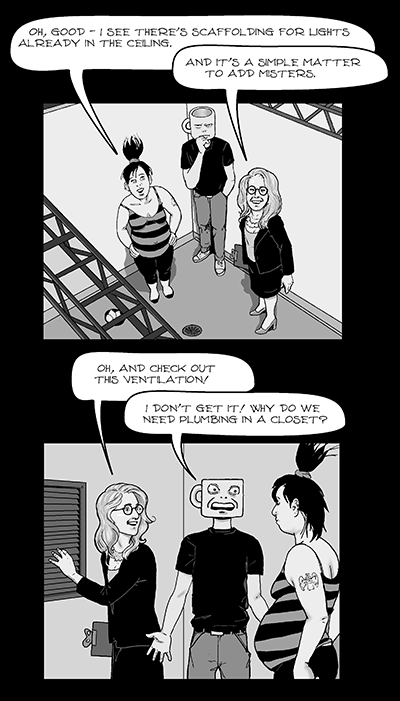 One additional benefit to making the character a woman: this scene arguably passes The Bechdel Test, depending on whether you consider Mugg’s presence in the room a disqualifier (this very long online thread considers the question; suffice it to say that opinions differ). Whatever the two women are discussing, it’s definitely not a man. Why DO we need plumbing in a closet? All will be revealed next week.

Since it’s First Thursday, I am also posting a batch of Fan Art on my Patreon page, which is SO very special that it’s getting its own blog post, which goes up tomorrow!

On the Spencer Watch, it all came down to the immunity challenge on Survivor last night. Invincible Joe was on the verge of winning immunity yet again, balancing a Buddha statue on a 14 foot pole, when he passed out from exhaustion, giving the win to Keith, the perennial second-place finisher. There was some momentary concern and sympathy for Joe, which lasted about as long as it took him to regain consciousness. The on-set doctor quickly gave the go-ahead for Joe to continue in the game, but his goose was essentially cooked, as the remaining players (Spencer among them) weren’t about to let him go on to win more immunities in future episodes. The producers tried, through clever editing, to make it look as if the contestants might instead vote out the ultra-annoying Abi, but in the end Joe had his torch snuffed. Hey- it wasn’t Spencer! (As a plus, this week’s Reward Challenge included a visit from Loved Ones Back Home, so we got to see Spencer’s girlfriend. She’s pretty.)