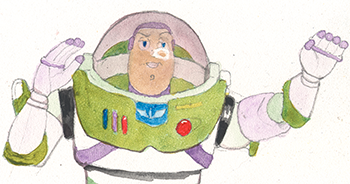 It’s the First Thursday of the month- and year,- when I post Fan Art on my Patreon page.

David Chelsea is reading: Out on the Wire: The Storytelling Secrets of the New Masters of Radio
by Jessica Abel


This week, I decided to do portraits of various three-dimensional representation of licensed characters; plush dolls, action figures, and the like, working in acrylic on canvas and gesso panels, and using the camera lucida or mirror to copy the features exactly. I meant to use figures that have belonged to my kids, but recent yard sales and spring cleanings have depleted our supply of character icons to such an extent that I actually had to buy a couple at Goodwill. In case you don’t recognize the characters, they are Buzz Lghtyear from Toy Story, Feathers McGraw, the penguin from The Wrong Trousers, and Dora the Explorer: 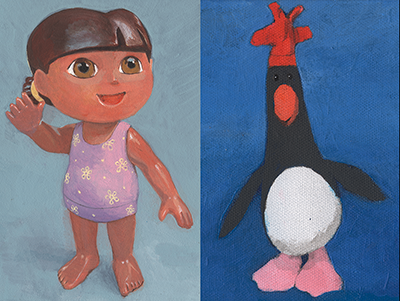 Also this week, a genuine piece of fan art, this Sol Steinberg-esque
portrait of David Chelsea sent in by fan Bob Levin: 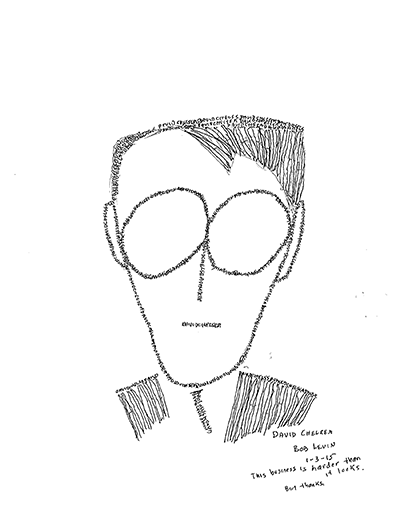 And also this week, the latest installment of my continuing web comic ARE YOU BEING WATCHED? After his adventures on reality shows reminiscent of America’s Funniest Home Videos, Survivor, and House Hunters, this installment finds Mugg in business with Mandy on a show based on Storage Wars, that one where people buy storage lockers at auction, and look for valuable items amid the junk.

This was a show that I used to watch all the time with my family a year or two ago, but we stopped watching after one of the regular buyers on the program, Dave Hester, quit and then revealed that the producers had cheated, sweetening the lockers with valuables bought elsewhere. Even though Hester later recanted and rejoined the program, there was no going back for us, and now I routinely skip past the channel when I see the program on.

This sequence is pretty much unchanged from the way it was in the 24 hour comic version of ARE YOU BEING WATCHED?; The item that Mugg and Mandy are staring at is a Lunar Excursion Module. (The LEM in my story is three quarters of actual size- a full-sized model would have required an impossibly huge locker to contain it).

For reference, I set up the scene in the CG program Lightwave, using mostly free models found on the Internet, including the lunar module: 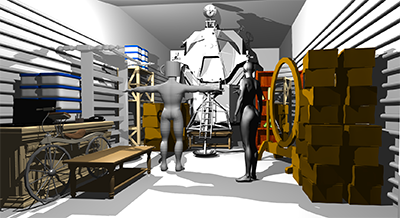