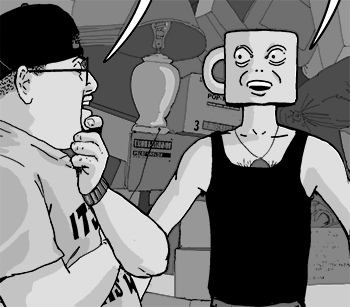 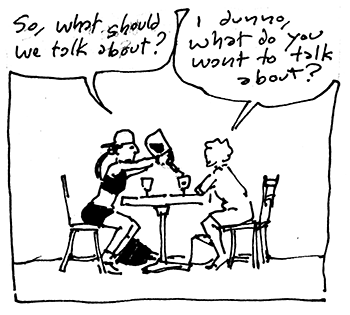 David Chelsea is reading: Crime Does Not Pay: City of Roses
by Phil Stanford


This week finds Mugg and Mandy as the stars of a reality TV show reminiscent of Storage Wars, trying to unload a possibly counterfeit Lunar Excursion Module onto a collector friend.

Storage Wars is a program in which dealers buy the contents of abandoned storage lockers at auction, after a very cursory first look, then hunt through the pile for hidden treasures, like a set of Hummel figurines, or a framed poster from the Fillmore East. I used to watched the show with my family until one of the regulars, Dave Hester, quit and accused the producers of cheating by sweetening the lockers with valuable “finds” found elsewhere. (He also accused them of paying for breast enlargement for one of the female stars). Hester later recanted and rejoined the program, but for me there was no going back.

I borrowed many features of the show’s stars for my own version (titled Locker Pickers). Mugg and Mandy’s testy relationship is reminiscent of the show’s bickering young couple Jarrod Schultz and Brandi Passante, though Mugg’s tank top-and-jeans ensemble derives from the show’s resident roughneck, Darrell Sheets: 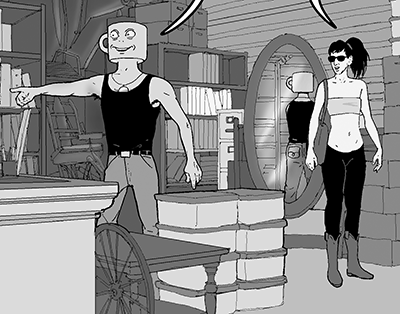 The collector’s brusque style and black ball cap are taken from Dave Hester, though his t-shirt and black shorts are more Jarrod’s style: 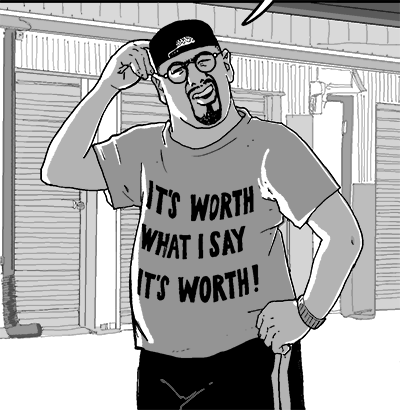