It’s the First Thursday of the month, when I post Fan Art on my Patreon page.

This month, it’s two more action figure portraits, done using the Camera Lucida, this figure of Mrs. Potato Head cosplaying as Wonder Woman, and a bubblehead of Rey, a character from the recent film Star Wars: The Force Awakens:

David Chelsea is listening to:
America
by America 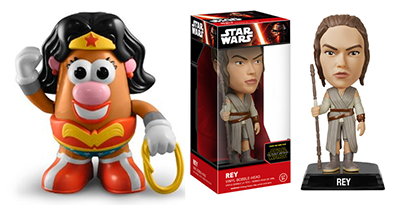 There has been something of controversy among Star Wars fans over the character Rey. Feminist critics have alleged that Rey is underrepresented as an action figure relative to the male characters in the film, and some believe that there is an active conspiracy to suppress her image on the grounds that “boys won’t buy girl toys”. Maybe there is something to this, as this bobble head was the ONLY figure of her I was able to find in stores.

Also this week on Patreon, a new page of my continuing webcomic ARE YOU BEING WATCHED? This week has Mugg between adventures, finding the devil at work on routine mischief:

I devilishly repurposed this week’s routine mischief from this popular looping gif: