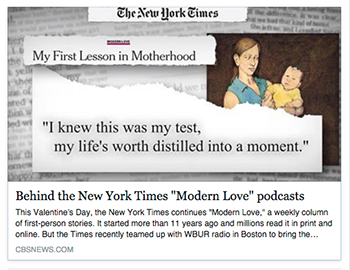 The Modern Love Column in The New York Times, which I illustrated from 2004 to 2008, is probably the most visible gig I have ever had. Since 2008, the column has been illustrated by other artists, but all of my old columns can still be found online.


Recently, the Modern Love column has extended into podcasts, in which the pieces are read aloud by actors. Each podcast page displays the original Times illustration as a graphic under the audio window. So far, all the illustrations have been by my successors, including this week’s. However, The Times recently got in touch to ask me for permission to reuse one illustration, and they said that there may be others. I will blog again when the podcast with that illustration appears.

In the meantime, you can watch this CBS News report about the Modern Love podcast, which features many of my illustrations as scrolling graphic elements. At its point I don’t know if any of those illustrations will appear as part of the podcast, but I promise to keep blog readers informed. 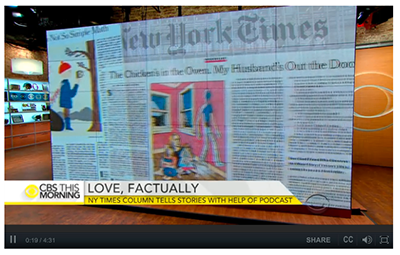