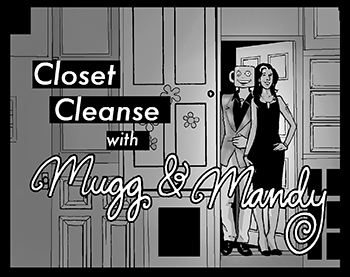 Yesterday was the First Thursday of the month, when I post Fan Art and a new installment of ARE YOU BEING WATCHED? to my Patreon page.

David Chelsea Is Listening To: Purity: A Novel
by Jonathan Franzen


In ARE YOU BEING WATCHED?, the serialized web comic about Reality TV, Mugg finds himself co-hosting a makeover show called Closet Cleanse, with girl of his dreams Mandy. The show is closely modeled on What Not To Wear, a show hosted by Stacy London and Clinton Kelly, which ran for ten years on TLC:

It was the cancellation two years ago of What Not Wear that finally spurred me to turn the 24 Hour Comic ARE YOU BEING WATCHED? into a full-fledged webcomic. I realized that I needed to act fast on this project, before all the references to existing shows became hopelessly dated.

The premise of What Not To Wear was that some individual with conspicuously awful taste in clothes (nominated by family or friends) was subjected to a makeover by style mavens Stacy and Clinton. The stages were highly ritualized; snarky Stacy and swishy Clinton usher their guest into a mirrored room, where they can see how awful they look from all possible angles, purge their closet of nearly every item, mercilessly mocking their awful taste all the while, lay out a few simple style rules (no horizontal stripes! no pleats!), send the guest to a high-end clothing store with a credit card, intervene when the guest drifts back to old, bad habits, stage a fashion show with their purchases, and finally unveil the new, style-savvy version to a group of family & friends (my usual take was that the show took someone with quirky, individual style, and substituted a boring and corporate look, but the guests always looked pleased).

I make another of my guest appearances as the makeover subject:

Next week we unveil my new look!

For this month’s Fan Art, I’m posting more drawings done at the ages of 4 to 5. This time it’s characters from Early 1960s Saturday Morning TV, Linus The Lionhearted and Alvin & The Chipmunks.

Alvin and his brothers Simon and Theodore probably need no introduction, since they are still making records and appearing in movies. My drawings are based on how they looked on The Alvin Show, which ran on CBS for one season in 1961-1962, and on syndication for years after that. 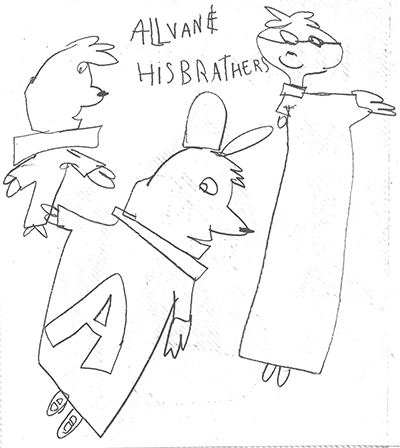 Linus may be harder to identify for anyone under say, fifty. Voiced by veteran actor Sheldon Leonard, he began as a pitchman in commercials for the cereal Hearts Of Oats in the late 50s, then when that cereal was discontinued, he sold Crispy Critters. His Crispy Critters ads were so popular that Linus got his own show in 1964, appearing alongside other Post Cereal pitchmen Rory Raccoon (Post Toasties), Lovable Truly (Alpha-Bits), Sugar Bear (Sugar Smacks), and So-Hi (Rice Krinkles).

Eventually, the FCC made a ruling that forbade children’s show characters from appearing in advertisements on the same program, and the show was cancelled. Linus lingered on for a while in commercials, but eventually disappeared altogether when Crispy Critters was discontinued. 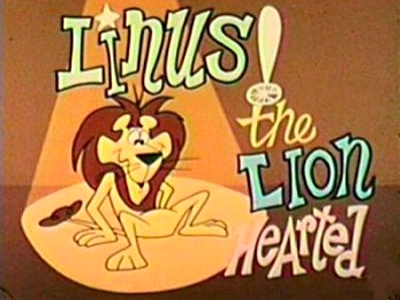