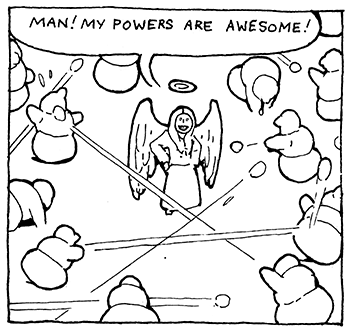 It’s the Second Thursday Of The Month, when I post archive comics to my Patreon page. This month, it’s THE ZONE, a xeroxed minicomic from 1989, originally drawn as part of Madi’s Mail Club, a series of booklets put out by East Village zinester Madi Horstman. THE ZONE was later expanded into my second graphic novel, WELCOME TO THE ZONE.

David Chelsea is reading: Mary Wept Over the Feet of Jesus
by Chester Brown


Among my works, WELCOME TO THE ZONE is the redheaded stepchild, a book even people who say they are big fans haven’t read. Cursed in its timing, the book was acquired by Kitchen Sink right around the time it was taking over the list of Tundra, a far larger comics publisher that was going out of business, and WELCOME TO THE ZONE got somewhat lost in the shuffle editorially as a result. By the time the book appeared in 1995, Kitchen Sink itself was on its last legs, I was too preoccupied by my move from New York to Portland to do much in the way of promotion, and the book was quickly remaindered.

The basic situation is the same in both versions- a musician pasting up flyers at night and the encounters he has- but readers will notice a number of differences: the winter setting was changed to muggy summer, the mutant-looking Toehead became a more human figure based on King Missile frontman John S. Hall, and the crew of do-gooders forcibly feeding the homeless morphed from school kids in Guardian Angel berets led by a nun in overalls to the freakish trio of Invert, Shroom and Mugg (who later became my interlocutor in PERSPECTIVE!, and is now the protagonist of ARE YOU BEING WATCHED?). I also added a multitude of new characters and additional plots, as well as a climax based on the Tompkins Square riot. The 1995 version is out of print but widely available, for example, on Amazon.

I have a vague plan to rework the stippled art in WELCOME TO THE ZONE in a more tonal style and post the results to my Patreon page, possibly as early as next month. The Trumplike character Ronald Duck makes the story more timely than ever. Keep watching this space for details.

Meanwhile, I have posted two more pages of a serialized Snow Angel story on Patreon. Snow Angel has made a crowd of snowmen, and organized them into a mass snowball fight, when she gets a signal. A comet is about to crash into the earth! Can she stop it in time?