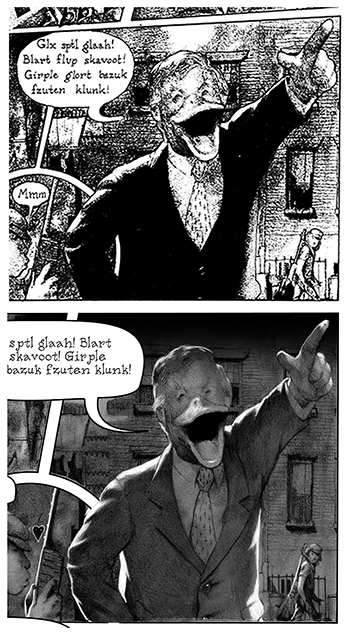 I have been preoccupied with edits on my latest book, PERSPECTIVE IN ACTION, for the past few weeks, and so I have not been putting up regular blog posts about my Patreon page. However, I have been faithfully posting material every week – fan art from my illustration days, cards from the BLOCKBUSTERS OF RHYTHM & BLUES set, and so forth, as well as new pages of my web comic ARE YOU BEING WATCHED?


In addition, last week I posted the first five pages- beginning with this one– of WELCOME TO THE ZONE, my distopian 1995 graphic novel set in a New York neighborhood much like the East Village, just in time for the Republican national convention which nominated Donald J Trump, whose doppelgänger in the story is real estate developer Ronald Duck.

This is a version which readers already familiar with the book will not have seen. Originally, I drew the art in a noir-ish pencil style, with a full range of gray tones. Since I did not trust halftone reproduction of the time, I converted that style into line by making photocopies of my pencil drawings and inking over the copies. This resulted in a very grainy, stippled-looking style for the final art. Halftone reproduction is not an issue when putting art online, so I have gone back to the original drawings and rescanned them, also reformatting the original square pages into standard comics pages (21 years ago I was heedless of commercial reality, but if and when this new version of WELCOME TO THE ZONE makes it into print, I definitely want the book to fit onto comic shop racks).

In addition to Ronald Duck, the five page sequence includes an attack on hapless tourists by a pack of giant wild dogs, and an attack on a helpless folk singer by a gang of knife-wielding skeletons. I will be adding WELCOME TO THE ZONE pages every month as I complete them, but if you would like to read ahead to the end, the original book is out of print but widely available from online sources such as Amazon:

Previous blog post about Ronald Duck, and other Donald Trump caricatures of mine.

Interview with comics writer Michael Aushenker about WELCOME TO THE ZONE.
Meanwhile on ARE YOU BEING WATCHED?, my reality TV-meets-the-Faust-legend webcomic, the Kibble Kitchen sequence in which Mugg and Mandy competed to make cat food is now concluded. This week Mugg drops in on the devil while he is up to his latest version of routine mischief, hunting Northern Spotted Owls:

Kibble Kitchen included a final bow for our recently deceased cat Bingo (star of his own 24 hour comic, BINGO THE CAT). He appears as one of three feline judges:

Bingo’s successor, Winston, is still a frisky kitten and has yet to appear in my work, but no doubt he will: