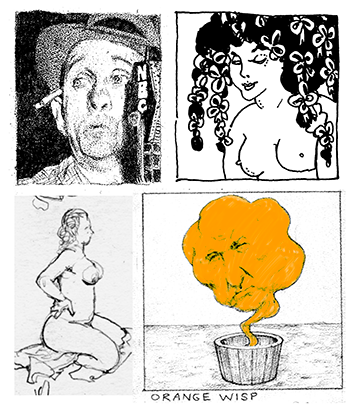 Here’s something I’ve been meaning to post about for some time, and I have finally found a break in my hectic schedule (which has lately consisted mostly of napping and coughing up phlegm- I’m coming off a bad cold).

David Chelsea is reading:Laughter in the Dark
by Vladimir Nabokov


My main Patreon page project has of course been ARE YOU BEING WATCHED? the serialized webcomic, but I have been interspersing it with other material like fan art, 1970s illustrations drawn for the Portland Scribe, archived comics, and reference photos. Lately, I’ve been posting a new project, a series of “end strips”:

The idea came to me when I posted a series of strips I drew a decade ago on Notepad, an application for the Palm Pilot. I noticed that the vertical format of those strips showed up very well on modern phones, and thought that it might be nice to start a new series of vertical strips. Then I noticed something else- a messy pile of skinny strips of paper on the floor by the paper cutter. These had been trimmed from the sides of larger sheets for some purpose or other, usually a school project of Rebecca’s, and I had been throwing them away for years. Why not put them to use?

The content of these strips is usually nonnarrative and inconsequential, like random drawings copied from pictures in my clippings file (special credit to any readers who can identify all the celebrities in the strip below):

The subjects range from a series of anagrams on the name of former Vice President Spiro Agnew to nude sketches from the YouTube life drawing series Croquis Cafe, to random lines from song lyrics that accidentally rhyme in anapest:

I’ve also begun a related series of Patreon strips on another batch of paper strips I used to throw out- the call slips identifying books or CDs or DVDs put on hold for me at the library. I find this an ideal format for short reviews, in this case of Daniel Clowes’s graphic novel Patience:

One last end strip for the road- in this one, my characters Sandy & Mandy look back at some of those we lost in 2016 (while strictly adhering to the rules of the Bechdel Test):

I’ve embedded links to the individual strips in the text, but to see the rest you’ll need to scroll through all the posts on my Patreon page. Patreon is a reader-supported site, but all comics content is free. If you like what you see, tell your friends, and $how Your $upport!