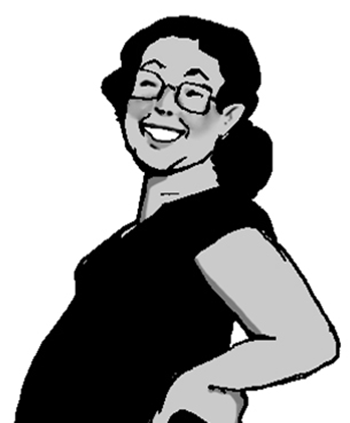 After a hiatus in which I was running pages of my latest 24 hour comic, WIPER WOMAN, I am back to posting pages of my continuing web comic ARE YOU BEING WATCHED? on Patreon. The setting for this week’s sequence is a Reality Show in which our hero Mugg and his fellow contestants have to draw 24 hour comics, hosted by the all-time champion 24 hour comics artist David Chelsea:

David Chelsea is watching: We Told You So: Comics As Art
by Fantagraphics 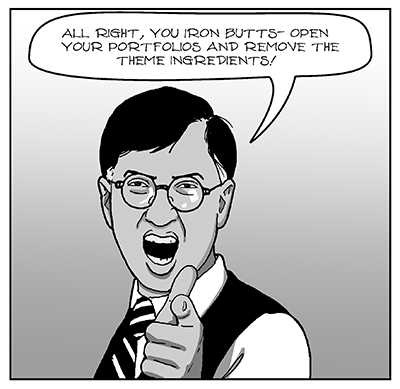 Most of these two pages are taken up with a list of “theme ingredients”, that the contestants have to use as inspiration for their stories:

If you’re feeling a bit at sea, I have thoughtfully posted a recap of the story so far on Patreon. You can also read the entire comic up to now, archived on Tumblr. 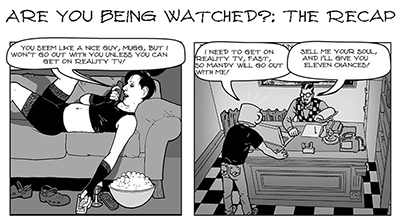 Also on Patreon, I have posted some model sketches of various characters who have yet to appear in the story: Mugg’s fellow contestants, crew members, etc. I am hoping that my very supportive Patreon subscribers will be inspired to propose names for these characters which we can vote on. You can easily become one of those subscribers yourself- levels start at a dollar a month!

Here are descriptions of a couple of the characters, in their own words:

“Greetings. I am happy to compete in this 24 Hour Comic Challenge. My personal beliefs do not allow me to depict human or animal characters, but I find abundant material in the world of mathematics. I am best known for my romance comic POLYHEDRAL PASSION, which is about a left-handed snub cube in love with a right-handed pentagonal icositetrahedron. Since they cannot be true duals without sharing orientation, the snub cube must deform to a small rhombicuboctahedron and then reform in right-handed form. l won’t spoil how that happens. In ordinary social dealings, I am nameless, but for the purposes of this reality show, I am required to have a name. Can you provide me with one?” 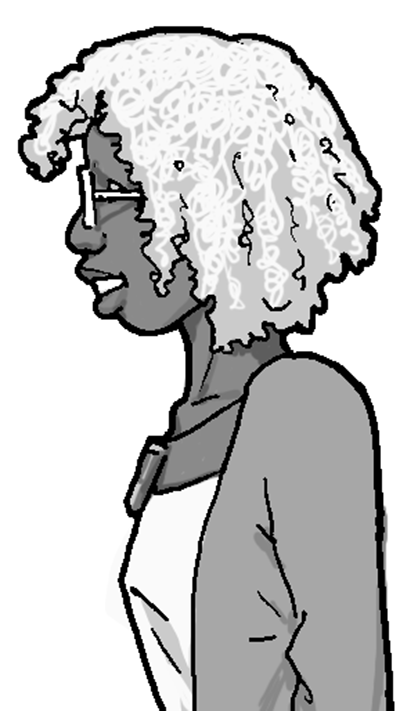 “Thrilled to be part of this 24 Hour Comic Challenge, though I don’t like the word “compete”. We’re all winners! I consider myself an American Manga artist. I know some people have a problem with that, but I just say, you don’t have to be Japanese to draw Manga, just like you don’t have to be French to make French toast! Now, I don’t like my real name, and I’m trying to choose a professional alias. If you wonderful Patreon people can think of any, please post them as comments, and when we have enough of them, we’ll vote on a winner, even though I think we’re all winners!!”

And keep watching my Patreon posts– I’ll be posting new character sketches in the coming weeks. I have a bit of a cushion before any of these characters actually appear in the story.