Another of my old illustrations just went up on the Modern Love Podcast website. On this week’s podcast, the actor David Oyelowo reads “Seeing the World Through My Wife’s Eyes,” about a man whose other senses become heightened after he loses sight, and whose spouse helps fill in the details he can’t discern.

The 2006 Modern Love essay was written by Ryan Knighton, an author whose work often describes his experience of blindness. You can follow him on Twitter.

Mr. Oyelowo recently starred in the film “A United Kingdom” and is known for his portrayal of the Rev. Dr. Martin Luther King Jr. in “Selma.”


This illustration was particularly fun for me, because I got to cast my mother as the fading starry image of Knighton’s wife. I used one of my favorite photographs of her, taken in the early 1960s by graphic designer and family friend Joe Erceg (Joe is also the father of Milan Erceg, who directed the 24 HOUR COMIC documentary I was recently in- suffice it to say, Joe’s family and mine go way back).

l also used this photo as the basis for a decorated envelope sent to my mother when she was getting her ESL degree in Hawaii: 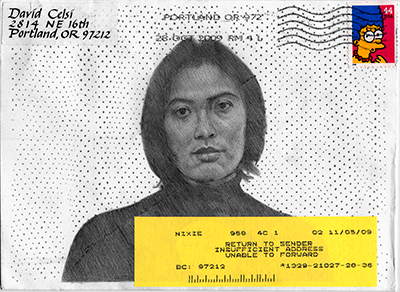 Also, today is the last, or next-to-last, day before an ARE YOU BEING WATCHED? page drops on Patreon. Three new characters appear for the first time, contestants in the 24 HOUR COMIC Reality TV show, and if you hurry, you can help name them (provided you’re a sponsor of my Patreon page):

“Hello, you wonderful Patreon subscribers. Let me tell how thrilled and overjoyed I am to be the youngest competitor on David Chelsea’s 24 Hour Comic Reality Show. I have never drawn comics before because my meticulous stipple drawing technique takes me far too much time, but I am determined to meet and surpass this challenge. My beloved guinea pig Brewster needs cataract surgery to save his eyesight, and the prize money will help me realize my dream. In the original comic, my name was Sun Luk Chow, but you can call me anything you please. Just post your suggestions.”

“As a boy I became obsessed with marginalia, and began looking for reading authors who were known for making notes and doodles in the margins of other people’s books: Poe, Coleridge, Melville, Plath,Twain, and Wilde. I filled the margins of his own books with little drawings: characters responding to and commenting on the stories and the shapes of the letters in the paragraphs. I recently received an inheritance from an uncle I barely knew, but had sent copies of some of my artwork. Taking this unexpected bounty as a sign, I quit my job as dishwasher at a popular breakfast hangout and am using my money for groceries and rent as I re-invent myself as a comic book artist. My premiere comic, “Marginalia Misfits,” is a series of origin stories for five characters who find themselves in the margins of books, all arriving through different means from different universes. My favourite book is my copy of the great Indian epic The Mahabharata, and ! aspire to emulate its grand scale in my story lines. I lives alone with my ferret, Twerple. ! enjoy chocolate covered coffee beans.”

“Well, they saved the best for last, obviously. As an established cartoonist with a wide following for my sexually frank online strip WETCOMIC, I am looking to leverage both my experience in the field and natural charm to win 24 HOUR COMIC. Coming into the contest with a history of success and a loyal following make me an obvious target, but that experience will serve me well in the competition. The first page I appear in drops tomorrow- give me a name, already!”