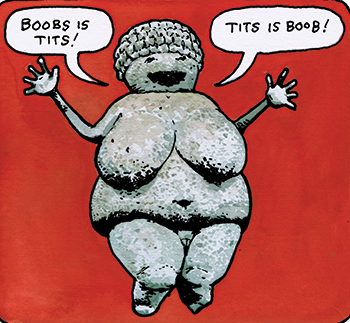 The latest issue of AMERICAN BYSTANDER, America’s freshest humor magazine, is out, by which I mean I’ve finally gotten my contributor’s copies in the mail. Issue #6 has a cover by the legendary Arnold Roth, as well as some choice humor, illustrations, and comics from a stellar stable of regulars: MK Brown, Rick Geary, Ron Barrett, Randall Enos, Mimi Pond, John Cuneo, Peter Kuper, etc.

David Chelsea is reading: Night of Camp David
by Fletcher Knebel, Co-Author of Seven Days in May 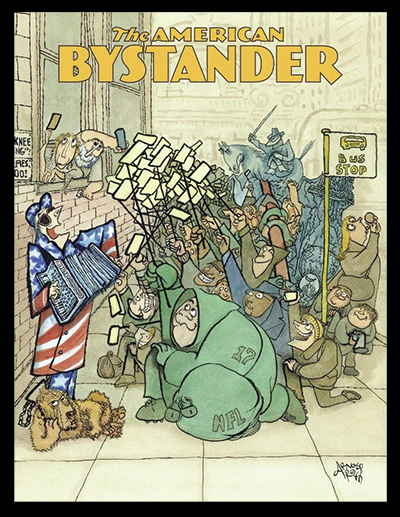 It also features the first national appearance in print by a promising new comics writer- my son Ben Celsi, who contributed some of his off-kilter palindromes, which he writes during gaps in his demanding schedule as a junior at the University Of Washington. Matched with my art, this maiden effort appears on page 60.

Here are multiple stages of the art process for a panel featuring a couple of characters named Amy and Tony:

(You may remember that Ben & I have been collaborating on palindrome comics for some time on my Patreon page. Here is a blog post about some of them).

The palindrome comic is not my only contribution to Issue #6: I also illustrated a humor piece about the various levels of service on The New MTA by Joe Keohane: 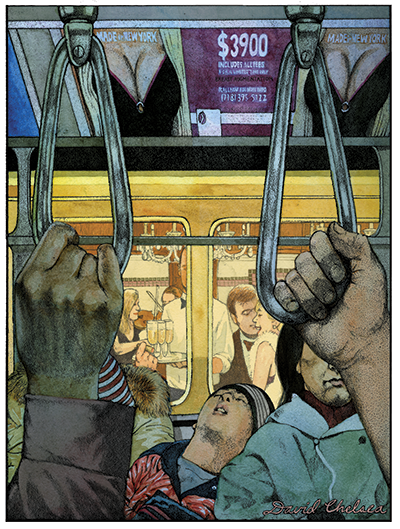 I’ve submitted some more palindrome ideas for issue #7, due out in a few months. No word yet from the editors, but I’ve got my fingers crossed.

Order a copy of the American Bystander #6 by clicking on this icon: