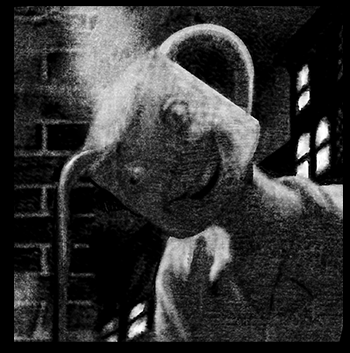 I’ve been continuing to put up episodes of the rebooted version of my 1995 graphic novel Welcome To The Zone on Patreon at a rate of two pages a week. This week’s installment introduces three new characters, Invert, Shroom, and Mugg. The three of them run a mobile soup kitchen which feeds the homeless, whether they want to be fed or not:

Regular readers of my work will surely be familiar with Mugg. This was his very first appearance, but he later became the perspective pupil in two of my instructional books, and the Faustian hero of my Reality TV webcomic Are You Being Watched? He’s a bit different here than later- his handle is on the other side, and he doesn’t speak (which may be lost on readers who don’t notice the absence of speech balloons). By the way, the first comic featuring Shannon Wheeler’s similar-looking character Too Much Coffee Man appeared in print before Welcome To The Zone, but I hadn’t yet seen it when I originally drew this sequence.

I sculpted models of the entire cast of Welcome To The Zone, which was a big help in drawing the characters consistently as well as lighting them realistically. Here’s a photograph of me with the crew:

I gave most of the sculptures away or threw them out when we moved from Portland to New York, but I kept a couple of them, including Mugg’s, which was made of durable sculpy rather than perishable plasticine: 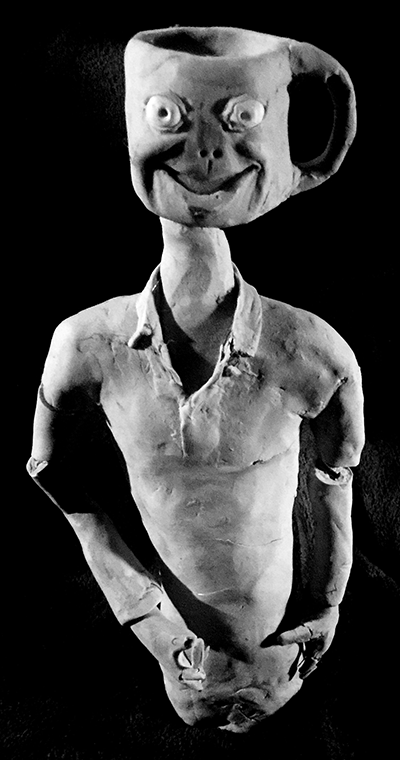 I also kept a sculpy bust of Invert: 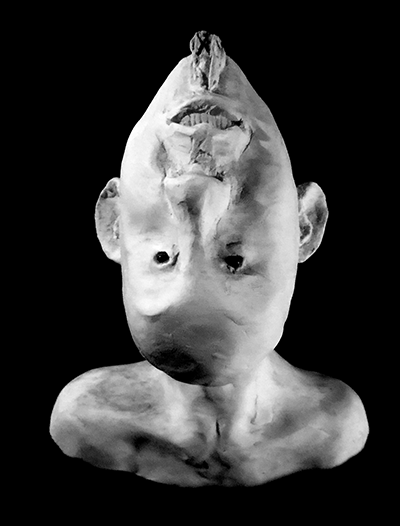 I’m pretty sure I still have a sculpy Shroom, but he seems to have gone awol for the moment.

Here is a comparison of a panel from the original version of Welcome To The Zone with the newer version. My original method was to Xerox a pencil drawing on coquille board at high contrast, then add details to the photocopy in ink. My new method is to work over a scan of the original drawing in Photoshop, using a full arsenal of brushes, overlays, and filters. Panel borders and balloons are added in Indesign. I think the new version is a big improvement- I’m particularly pleased with the dripping coffee on the character’s face:

Here are links to all the Welcome To The Zone installments posted so far: