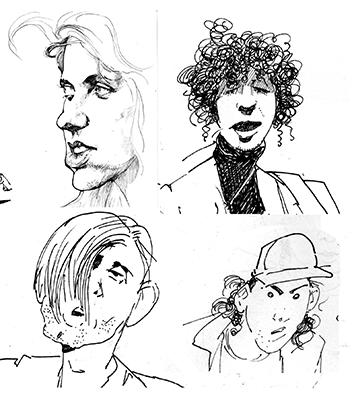 I’ve been continuing to post two pages a week from my revamped version of WELCOME TO THE ZONE on Patreon. I’m now up to part 15, including this particularly grisly death scene: 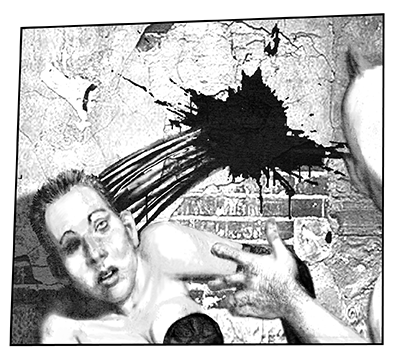 I also recently posted a Secret Stash of sketchbook drawings of some real-life singers and performers who served as models for characters in the story, paired with panels depicting their WELCOME TO THE ZONE counterparts. Many of them were part of the lower East Side Anti-folk music scene, such as Cindy Lee Berryhill, Lach, Roger Manning, Kirk Kelly, John S. Hall, and Brenda Kahn. While these may not be household names, at least they all have Wikipedia pages, unlike a certain graphic novelist named David Chelsea.

The image below shows two sketches of Anti-folker Roger Manning, along with his WELCOME TO THE ZONE doppelganger Folkie Joe McCoustic:

(By the way, Folkie Joe’s bizarre reverse Mohawk is my own bit of whimsy; Roger favored a half-long, half-crewcut hair style.)

To see the rest, you’ll have to click over to my Patreon page. While episodes of WELCOME TO THE ZONE are free for all to view, membership has its privileges; Secret Stash material is viewable by Patreon sponsors at the $4.99 level and above. Here are links to the sketches: