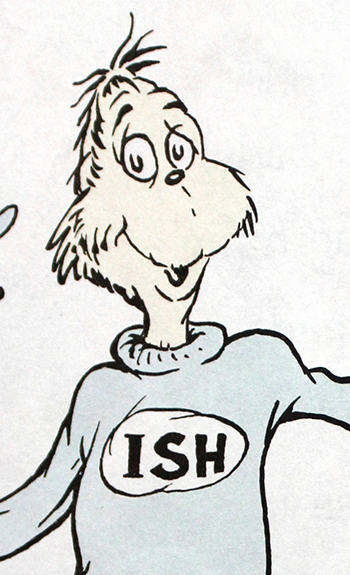 To be a freelance commercial artist can be an isolating experience, and one way I pass the lonely hours is by listening to lots and lots of audio books and podcasts. I listen to a number of podcasts under the SLATE umbrella, and one my favorites is Lexicon Valley, the language podcast hosted by linguist John McWhorter. In one of his programs a few weeks back, John made passing mention of a new word, “ish”, which he defined as a truncated sort-of-adjective, used thus: “Is your car green?” “..ish.” This piqued my interest, and I wrote in to point out that “ish” has a history predating that use.


I first heard it on this old episode of the 1930s and 40s comedy program “Vic and Sade”, which aired on the local public radio in the 1970s. Sade says “ish” twice in quick succession at around 11:34. I’m pretty sure “ish” crops up on other episodes as well, and it made such a strong impression on me that I picked it up as my own expression of incredulity at anything stupid or outrageous, kind of the way many people say “hush!” My children have always found this a pretty hilarious Dad-ism, and to this day I can bring my daughter Rebecca, who is a freshman in college, to hysterical laughter simply by dropping “ish” into conversation.

My own theory was that this use of “ish” derives from the 1930s-era mock-Yiddish expression “Ische ga bibble?”, which was purported to mean “I should worry?”. A comedian named Merwyn Bogue, who performed with Kay Kyser’s band, took “Ish Kabibble” as his stage name.

(“Ish” also pops up as the fellow who swishes when he wishes for fish on his dish, in One Fish Two Fish Red Fish Blue Fish, but I’m guessing that is pure coincidence.)

John wrote back to say that he had his doubts about the “Ish Kabibble” theory, also mentioning that though he is an old-time radio fan, he always found Vic & Sade “tragically dull” (De gustibus. I consider Vic & Sade a classic of deadpan absurdism, cut from the same laconic cloth as Bob & Ray and Steven Wright.). On the next Lexicon Valley he played a bit of the Vic & Sade clip, inviting listeners to write in with their own theories as to the origin of “ish”. He also gave me a shout-out for having drawn his attention to “ish”, though he oddly called me “Michael Chelsea” (he corrected the goof in a later podcast). Though I recommend you listen to the whole thing, the “ish” segment on John’s podcast comes at about 40:13.

A listener named Michael Feely wrote in with what seems like the most plausible explanation for “ish”, something to do with Scandinavians settling in the Midwest. I won’t spoil it- you can listen to the “ish” explanation on this podcast, starting at about 31:38.

John likes to close his podcasts with a musical selection. I leave you with Ish Kabibble singing the SONG “Isch Ka Bibble” with the Kyser Band.