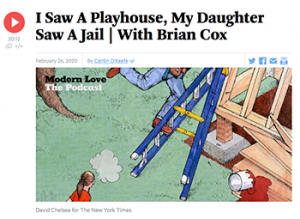 I had two of my old Modern Love column illustrations from the New York Times repurposed for the podcast in February. From the website:

“How do you fall in love again after loss? How do you feel with all the complicated, conflicted emotions that come from grieving one person, and also opening yourself up to loving someone else?

That’s what Brendan Halpin explores in his essay. It’s called “Dedicated to Two Women, Only One of Them Alive.”

It’s read by Terry Crews. He stars in “Brooklyn Nine-Nine,” which returns to NBC on February 6th.”

Ronald Berger takes on that question in his essay, “I Saw A Playhouse, My Daughter Saw A Jail.” It’s read by Brian Cox. He recently won a Golden Globe Award for his performance as Logan Roy in the HBO show “Succession.”

I was paid for both uses, but it was a bit of a bust- the first illustration didn’t actually appear on the website, making only a phantom appearance on the Google listings page, and the second did appear, but severely cropped. The culprit in both cases seems to be the horizontal format the podcast uses for illustrations on its website, which the vertically formatted originals fit poorly. Unfortunately I did not have enough foresight a decade ago when I drew these to anticipate that they would have a second life as vertical strips.

Listen to “Dedicated to Two Women, Only One of Them Alive.”

Listen to “I Saw A Playhouse, My Daughter Saw A Jail.”

Here are the uncropped versions. First, “Dedicated to Two Women, Only One of Them Alive.”: 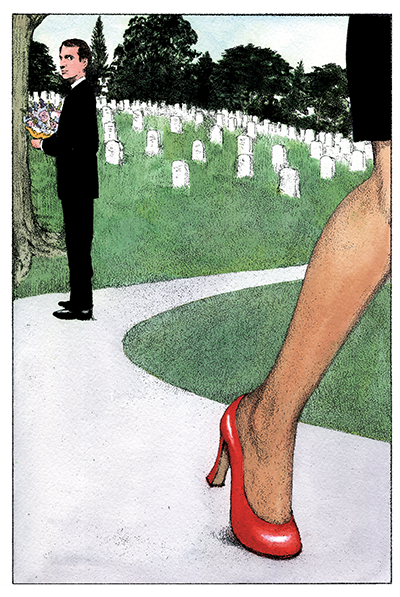 Second, “I Saw A Playhouse, My Daughter Saw A Jail.”: 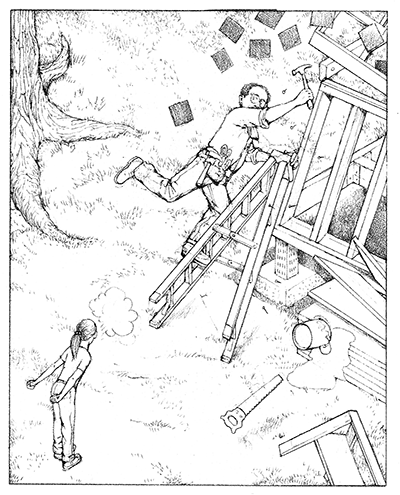 I usually have the original image file on disc, but this time I couldn’t find it, so I actually had to dig out the original art and rescan it. My method in these Modern Love pieces was to combine two pieces of original art, a pencil drawing on coquille board scanned at high contrast as line, and a watercolor painting. 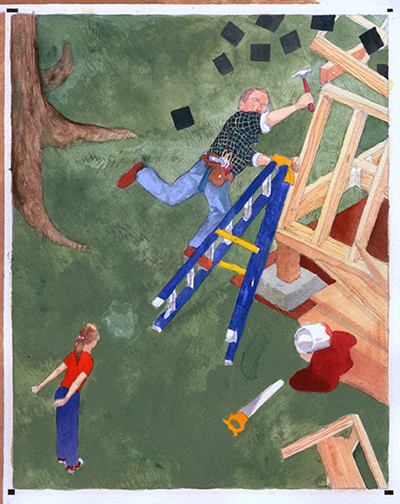 With a bit of color adjustment in Photoshop, the two pieces are combined to create the final art: 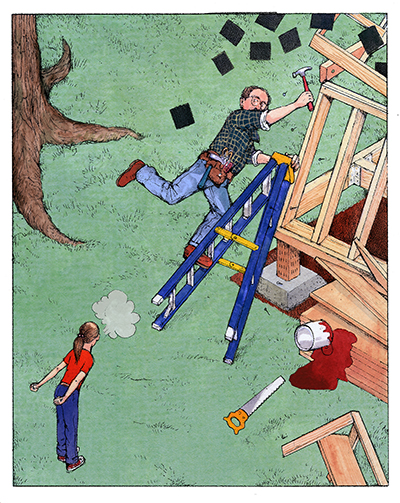 By the way, I was not consulted about the cropping on the illustration. If I had been, I might have come up with a more daring solution which involved moving some elements of the art around: 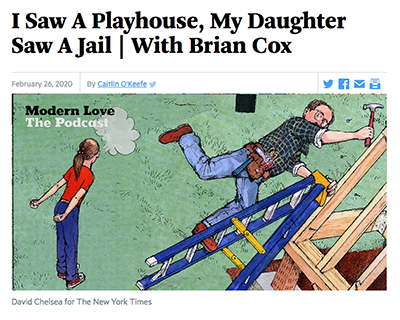