Here’s a review of the Bush years utilizing the best of related INX stuff including many of my drawings. Also with work by Igor Kopelnitsky, Peter Kuper, David G. Klein, Martin Kozlowski, and that’s just the K’s! END_OF_DOCUMENT_TOKEN_TO_BE_REPLACED

I miss him, he was a real great pal and uniquely faboo at cooking up fun stuff! As well as being such an amazing photographer. END_OF_DOCUMENT_TOKEN_TO_BE_REPLACED 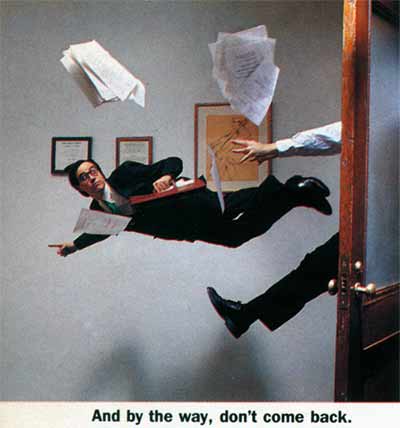 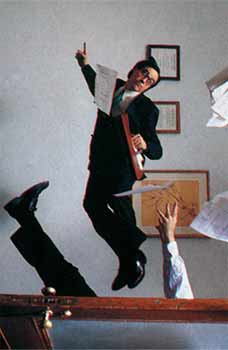 Years before I wrote my own book about perspective, I was experimenting with pushing its outer limits. I was inspired by seeing Buckminster Fuller’s dymaxion world globe projected onto the sides of a twenty-sided polyhedron to try the equivalent in perspective- an entire 360° visual field as seen from one point in space drawn onto twenty triangles to form a continuous image. I did a couple of early drawings using this method, including a fold-up ornament sent out as a Christmas card in 1993.  Eventually I got tired of the difficulties involved- each of the twenty triangles has its own perspective, and it’s extremely difficult getting objects to line up over the gaps- and I figured out that it would be simpler to draw a continuous image on a spherical surface. I got a wooden ball from a crafts store and drew a 360° perspective grid on it- basically a picture of a cube with ruled lines on it, viewed from inside so that six vanishing points each line up with the center of a face. Here is an example of a ball ruled with perspective lines. Over that I did an acrylic painting of the garden on the roof of our loft building in New York and gave the finished piece to Eve as an anniversary present in 1994. This post shows the picture of the ball- as you can tell from nearby objects, it is quite small, only about one inch square. END_OF_DOCUMENT_TOKEN_TO_BE_REPLACED

Garrison Keillor sings songs about the election with lyrics by Calvin Trillin. Caricature from The New York Observer.

She once wrote a book entitled She Was Nice To Mice, but evidently actress Ally Sheedy also has a soft spot for pigs. Caricature from The New York Observer.

END_OF_DOCUMENT_TOKEN_TO_BE_REPLACED

I have known my friend Geoff for something like forty years. We met at school, were roommates in New York for a while and corresponded when we lived in different cities. Now he lives nearby and comes over every couple of weeks to show me movies. Geoff is a serious film buff whose tastes run to obscure noir and horror, and I believe he sees it as his mission to fill in the gaps in my education. The last film he brought over, The World’s Greatest Sinner, is  so obscure it never had a theatrical release, even though it stars and was written and directed by one of my favorite actors, Timothy Carey. A tall, memorably sinister John Turturro type, Carey  was usually cast as a  secondary thug in obscure crime pictures, but he had small parts in East Of Eden and The Wild One, and larger ones in a couple of classic Stanley Kubrick pictures, The Killing and Paths Of Glory (probably his best performance- one of Carey’s persistent mannerisms was grinding his teeth like a bad Kirk Douglas imitator, but in this one he lays off, possibly because Kirk himself is the star). His distinctive mug almost makes caricature redundant, but here goes: