My first foray into Adobe After Effects, this animated logo is taken from the Cellar Dwellers chapter of ARE YOU BEING WATCHED?, a graphic novel about Reality TV which ran from 2015 to 2017 on my Patreon page, and which is forthcoming in book form from Dark Horse Comics. My eventual plan is to make animated logos for all the Reality shows in the story as a video promotion for the book. I got a major assist on this one from Milan Erceg, After Effects wizard and director of 24 Hour Comic, the recent documentary I appeared in. I did the illustration and lettering, but Milan added the creepy blur-in effect and lots of digital noise to simulate the look of a vintage TV show. My hope is to eventually acquire enough chops to be able to do this kind of thing on my own with no help. Wish me luck! 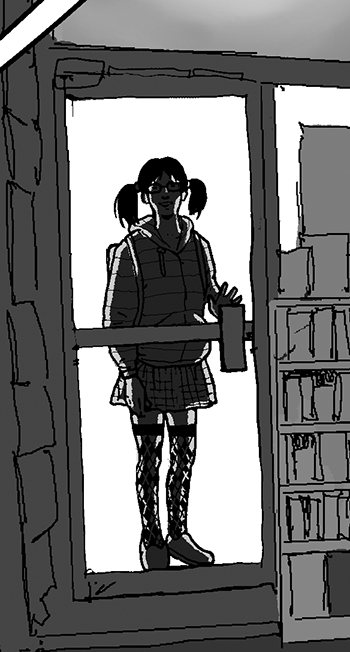 On Patreon this week, the latest page of my continuing webcomic ARE YOU BEING WATCHED? In recent weeks, Mugg has been starring on Cellar Dwellers, a Reality TV show in which he is co–owner of a comic shop. This week, Mugg and his partner get an unexpected visit from a new customer:

David Chelsea Is Listening To: Wilson
by A. Scott Berg