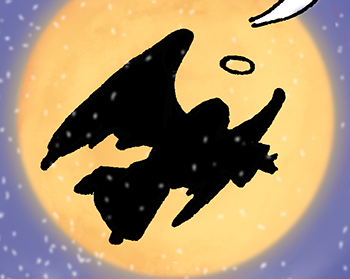 Today, Wednesday, October 21st, 2015 is the day DARK HORSE PRESENTS #15 goes on sale at comics shops everywhere. This issue is very special for me, because it contains the second Snow Angel story ever in print, an extra-spooky adventure set on Halloween!

END_OF_DOCUMENT_TOKEN_TO_BE_REPLACED

As I mentioned in my previous post, I will be at Wizard World’s Portland Comics Convention this coming Friday, Saturday and Sunday, signing books, selling original art and meeting fans (mostly other people’s, but I’m happy to say hello to anyone). I’m also booked for a panel this Saturday on Independent Comics, moderated by the esteemed writer and editor Danny Fingeroth, and with a truly stellar lineup of my fellow creators: Mike Allred, Shannon Wheeler, and Jonathan Hill.

END_OF_DOCUMENT_TOKEN_TO_BE_REPLACED

Tomorrow is your chance to see me and a distinguished panel of colleagues (including Axe Cop cartoonist Ethan Nicolle, who drew the above image) speculate on The Future of Comics at WebVisions Portland, the annual conference on all things Web (spoiler alert: The Future Of Comics is probably going to involve the Web). Here’s copy from the Website:

While blockbuster films based on comic book characters have been a box office bonanza, the comic book industry as a whole has experienced radical change. Industry powerhouses like Marvel have diversified their non-print offerings by unveiling Infinite Comics, a new digital format targeting mobile devices. For smaller publishers and independent artists, the future of comics will be built on the shifting sands of change, but opportunities abound for self publishing, crowd sourced funding and digital distribution.

When I launched this website two and a half years ago (with the very able help of Brad Smith and his crew at Hot Pepper Studios) I naturally intended to put my name on it, only to find that the web address davidchelsea.com was already taken, by an Italian porn actor with the same name. Who knew? I had no choice but to settle for the more generic but available dchelsea.com, as well as a few variants like davidchelseainlove.com, and so it has been ever since. Well, good news- a few days ago my friend Jacob Mercy informed me that my namesake had relinquished his hold, and the domain name was once again available. One credit card payment to Godaddy.com later, the name was mine.
END_OF_DOCUMENT_TOKEN_TO_BE_REPLACED