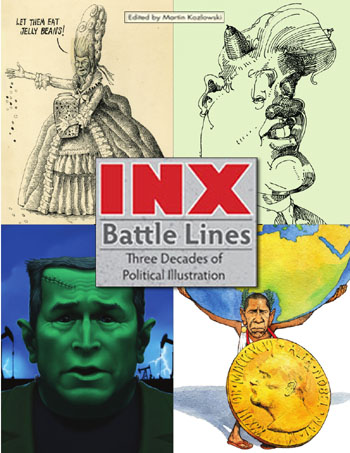 This just in: A new collection of art from INX, the op-ed illustration syndication service that I am an occasional member of, edited by the great caricaturist Martin Kozlowski. I quote from the press release:

David Chelsea is reading:
Comics: Between the Panels
by Steve Duin and Mike Richardson


“In over 275 explosive illustrations, INX Battle Lines etches a searing picture history of the last three decades. These are the very best drawings from the files of the INX Group –– images that have been syndicated to journals of opinion in the U.S. and abroad since 1980.

The 55 renowned artists represented here are equal-opportunity offenders, and their work crosses party lines –– Red States run red and Blue States sing the blues in works that are by turns hilarious, harrowing, and haunting.

If you’re a fan of great illustration, political cartoons, or hair-trigger satire, you will be mesmerized by this collection.

Friend or foe, you’ll want to see where these expert artists draw the line.”

I am honored that my caricature of Obama occupies the southeast corner of the cover: