I hope everyone liked that last blog post, in which I took Ivan Brunetti’s recent New Yorker cover, (which mixes elevation and vertical oblique projection) and created all-elevation and vertical oblique versions in Photoshop, because I had so much fun that I decided to take it one step further and create a new version in plan view, that is, as if seen from overhead by an observer at an infinite distance (with the roof removed, of course).


Plan views, usually paired with elevations, are an essential part of architectural drawing. All planes parallel to the ground (like a tabletop) are shown as true shapes, and all planes perpendicular to the ground (like a vertical wall) are invisible. Photographs taken from directly overhead with a long lens approach a plan view’s lack of apparent depth, and satellite photographs such as those displayed on Google Earth come even closer.

And of course, maps are plan views: 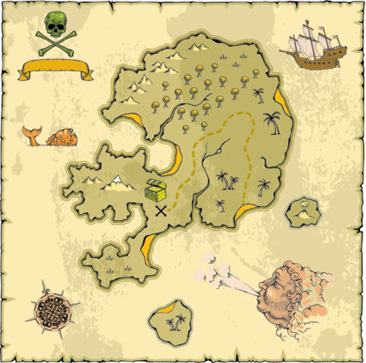 Plan view images are still unusual in illustration and cartooning. When they do appear the point is often that they are difficult to read, like this Droodles sketch. What is it?

A chinaman on a bicycle!

Often, a plan view is used for a one-off gag like this sketch of Osama Bin Laden by Salt Lake Tribune cartoonist Pat Bagley:

One would think that plan views would come naturally to the schematically-minded cartoonist Chris Ware, but I wasn’t actually able to find one. This Jimmy Corrigan panel is about as close as he gets.

The crime scene illustration by Jérôme Huguenin for Stir Crazy Killing resembles a preliminary sketch I did to work out perspective for a noirish illustration job.

Returning to Brunetti, converting his vertical oblique original into a plan was a fairly simple matter. My first step was to scale up the floor area until the ellipses representing the foreshortened tops of paint cans fattened into circles, then I shifted the circles onto their bases, eliminating the sides of the cans.

Imagining how these two human figures would look from above was a challenge- fortunately their large ovoid heads cover a lot of detail.

I had to imagine what the fixture inside the ceiling lamp looked like from above. I was free to place the lamp anywhere in a direct vertical line from its original position, since Brunetti’s drawing offers no clue how far it is from the wall.

And here is the final result: