It is the second Thursday of the month, and if you have been following my Patreon page, then you know that’s when I post a comic from the archives. This month’s comic is PIGGOLA GOES MOTORING, part two, a previously unpublished story from one of my sketchbooks, drawn in 1974, when I was fifteen. (Since this comic is on the long side, I broke it into two parts; I posted the first part last month.)


Piggola was created by my school friend Timothy Hill (now a singer-songwriter) when I was in eighth grade. A group of us young kid cartoonists used to draw stories featuring Piggola in the art room at the Metropolitan Learning Center, each drawing a frame in turn. We were heavily influenced by Early 70s underground comics, so Piggola resembles Wonder Warthog, but without superpowers. Eventually my friends tired of the character, and I wound up drawing Piggola stories myself for a few years.

As the title implies, this is a road trip story. It begins with Piggola leading a mellow countercultural existence in a geodesic dome treehouse with a hippie wife and pig-nosed daughter, but he soon ditches that to go hitchhiking wherever, man. 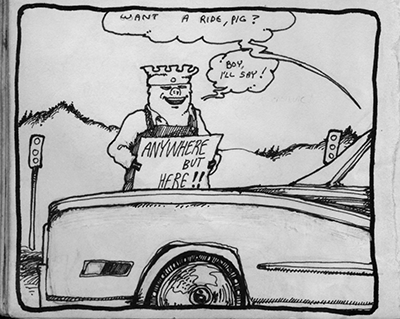 A lot of my early stuff embarrasses me now, but I’ve always liked this story. I don’t want to spoil too much, but adventure awaits on the open road: 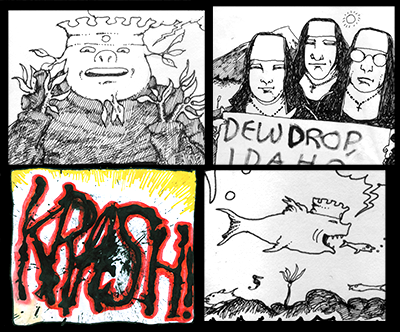 I particularly like the mellow 70s lyrics to the songs playing on the “soundtrack” (pretty well-drawn car, too): 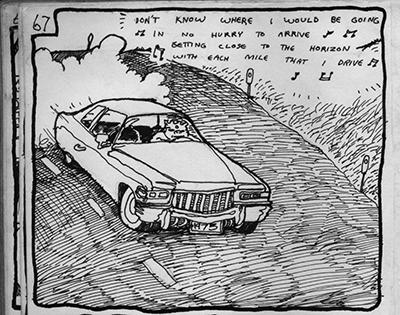 You can read part two of this story here.

and here is part one.

No pressure, but if you like what you see, please consider becoming a Patreon supporter, so that I can continue to bring you comics on a regular basis.