Apologies to followers of my Patreon webcomic, ARE YOU BEING WATCHED?; this week’s installment is two days late. I have an excellent excuse, however- Eve & I spent two days this week engaged in the bittersweet task of helping our son Ben move into his freshman dorm at the University of Washington. Here he is, comfortably ensconced with his portrait of President William McKinley: 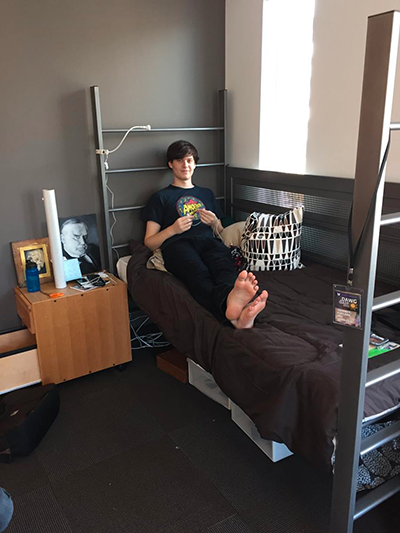 
In this week’s ARE YOU BEING WATCHED?, we find ourselves on the popular Reality TV show Expulsion Island, where Mandy faces the Immunity Challenge, stacking a precariously balanced pile of seashells in order to win a necklace that will save her from being voted off the island: 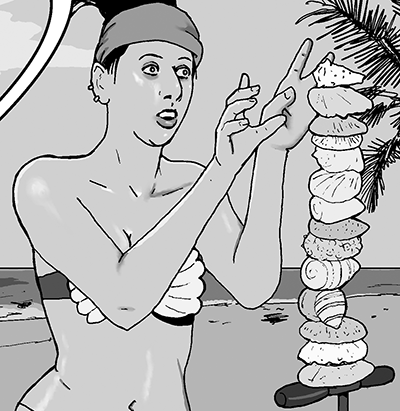 The main subject of this comic is Reality TV, but one nice thing about a long-form story is that I have plenty of chances to throw in references to things having nothing to do with the topic. Beat The Clock type contests are the typical fare on Survivor, (the model for Expulsion Island), but I’ve turned MY Immunity Challenge into a tribute to the Rube Goldberg Machine, named for the newspaper cartoonist best remembered for cartoons like this one:

Goldberg’s influence is wide-ranging; the popular board game Mousetrap is a three-dimensional Rube Goldberg Machine, as is this video for the band OK Go. My favorite Goldberg tributes are the sly little machines that regularly appeared on the Japanese Children’s TV show Pythagoras Switch.

These panels should give you a taste of the Immunity Challenge; for the rest, here’s another link to the comic:

The real Survivor had its season premiere on Wednesday, but Eve & I were otherwise engaged, and had to miss it. We still haven’t had a chance to catch up online, so no spoilers, please!

Oh, and I’m supposed to do a video hangout on Fourth Thursday, but that fell by the wayside, too. I’ll try and do two next month.