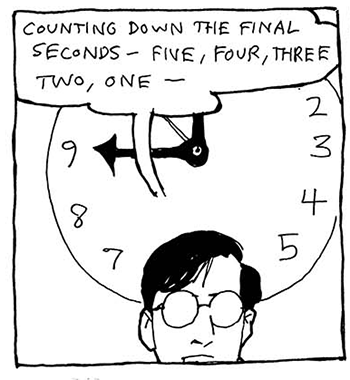 It’s the Second Thursday of the month, time for me to load a new comic from the archives to my Patreon page. This month, it’s the third and final installment of ALL DAY AND ALL OF THE NIGHT, a 24 Hour Comic in which Mugg finds himself a contestant on a Reality TV show hosted by famous cartoonist David Chelsea, in which he has 24 hours to draw a comic. Mugg ends up one of the top two contestants, competing for the top prize with a six-year-old boy in a wheelchair, who draws with a pen in his mouth (the blue ribbon panel of judges includes my own early character Piggola, The Virgin Valkyrie, a video game character who appeared in another strip of mine, THE GIRL WITH THE KEYHOLE EYES, and Kitchenbot, a robot formed of pots and pans and and cutlery, vaguely similar to Paul Guinan’s Boilerplate.): 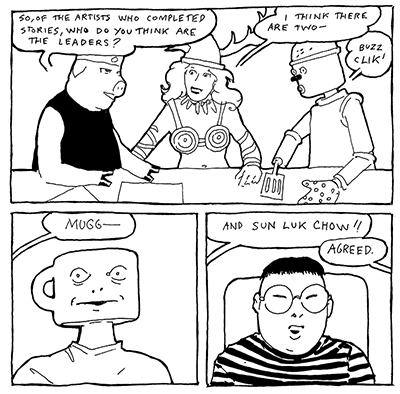 Also on Patreon this week, two more pages of the latest Snow Angel story, in which she meets fellow superhero Lady Goddess. Things have taken an unusual turn– Snow Angel now has powers and abilities she never had before! In this panel, she makes it rain badminton birdies: 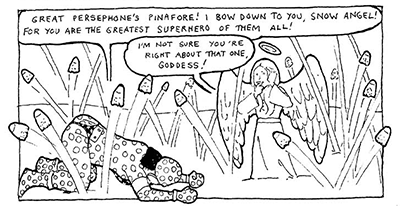 Could this all be too good to be true? Read the story and find out!

Meanwhile, if you missed the latest episode of Survivor, Spencer was something of a bystander to this week’s events. A bloc led by Savage, Jeremy, and Joe had the upper hand, and had targeted Kelly Wentworth, one of three younger women, for elimination. However, Wentworth turned the tables when she pulled out an immunity idol that no one (except we viewers at home) knew she had, snuffing the torch of Savage, the ringleader. Spencer now has a one–in–11 chance of winning the million dollars!