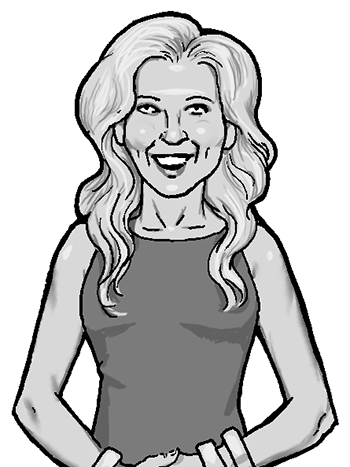 As I mentioned in my last post, ARE YOU BEING WATCHED?, is taking a hiatus while I work up new pages. The next sequence will take place entirely at the taping of a Reality TV show on which contestants draw 24 Hour Comics. Mugg is of course among the contestants.

David Chelsea is reading:How to Cook a Moose
by Kate Christensen


I would like to involve my Patreon sponsors in the creative process, by giving names to some of the supporting characters who appear in this sequence. I have been working up model sheets and biographies for a number of them. Two weeks ago it was one of Mugg’s fellow contestants. Last week it is the hostess of the Reality TV show 24 HOUR COMIC. Here’s what she has to say for herself:

”Hi, All! So let me tell you a little about myself! l grew up in Coral Gables, and after graduating from the Ron Bailey School Of Broadcast (I’m not saying how long ago! ha ha!), I got my first job as a TV weathergirl at KTOO-TV in Juneau! (Brrr!) Since then, I’ve moved moved on to hosting duties on such Reality TV programs as SCHRIMSHAW WARS, SALAD SPINNERS, BRAIDING BATTLE, and BEAD BAKERS, until I got a chance to host this show! Gosh, I’m just so blessed to be working with the totally brilliant Eisner-nominated cartoonist David Chelsea! It truly is a dream come true!

So, maybe I’m all frazzled from staying up all these hours, but I can’t for the life of me remember what my name is! Can you nice Patreon sponsors come up with some suggestions? When we have enough of them, we’ll vote on a winner! Love you all!”

Below her is this weeks’ character, one of the production assistants for the 24 HOUR COMIC shoot:

”Hi, I’m a playwright and performance artist who has mostly appeared on alternative stages in Brooklyn and the East Village, and I won the coveted Performance Art Yammy Award for my one-woman show Triumph Of The Shrill. Hey, but a girl’s gotta eat, so I’m helping out on this new show, which they tell me will do for comic books what SKIN WARS did for body painting. I do a little bit here and there on the production, but my big job is pushing the drinks cart around, and making sure none of the contestants go thirsty. The producers tell me that keeping all the contestants buzzed really helps ramp up the sexual tension, and that makes for great television!

Just between you and me, I’m being paid under the table, and I’m not sure I want to use my real name on this project anyway. Can you help me come up with a good alias?”

I’m inviting name suggestions from all my Patreon sponsors. I’ll post them under the drawings as they come in, and have the sponsors vote on a winner. You can participate by going to my Patreon page and signing up as a patron, for as little a 99¢ a month. You’ll have the fun of helping name this and other characters in ARE YOU BEING WATCHED?, and the satisfaction of being a Patron of The Arts.

Here are the links!:

Production Assistant.
Next week: someone else!