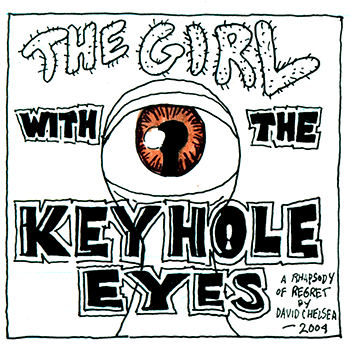 Here is another in my irregular series of posts about stories in my 24 hour comic collection SLEEPLESS, published this spring by Dark Horse. THE GIRL WITH THE KEYHOLE EYES was drawn in 2009 and published as a limited-edition mini comic to raise money for the medical expenses of underground cartoonist S. Clay Wilson. The jacket flap copy (which riffs on the then-popular Facebook feature 25 Random Things About Me), should tell you all you need to know about the story: 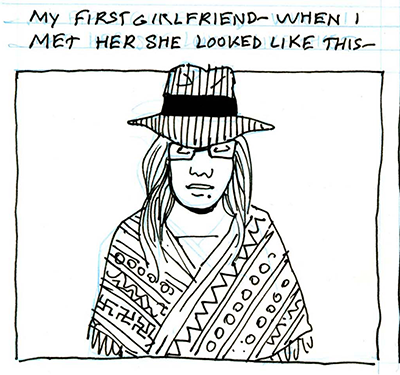 24 Random Things About My 24 Hour Comic.

1. The book you have in your hands is an exclusive premium for those who have contributed to the S.Clay Wilson Special Needs Trust.

2. The Trust was set up to help pay the medical expenses of pioneer underground cartoonist S. Clay Wilson. In November 2008, Wilson was found face down and unconscious between parked cars after attending the Alternative Press Expo in San Francisco. He spent a week in intensive care and faces a long recovery.

4. Actually, Crumb is my favorite Zap guy, but I think Wilson drew the best women.

5. This story was really drawn in 24 hours, between the hours of 10am Saturday April 11th and 10 am Sunday April 12th 2009 at Cosmic Monkey Comics in Portland, Oregon.

7. The idea is that one attempts to draw one page of comics an hour for 24 continuous hours. Understanding Comics author Scott McCloud devised it as an exercise for a cartoonist friend who was a chronically slow worker, always missing deadlines. 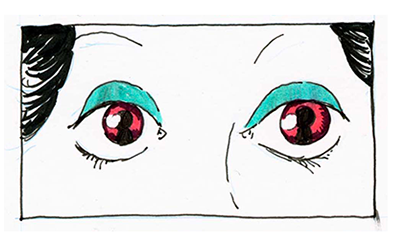 9. This one is the eleventh. I believe this to be a World Record.

10. Whenever I am planning to draw a 24 Hour Comic I go off caffeine for a week, and I take my first sip of coffee at the close of hour eight.

11. After that, I break out the chocolate-covered espresso beans.

12. Ken O’Connell of Copic marker provided art materials and manga-ruled paper for the event. Apart from blue pencils, my story was drawn using only their products. Thanks, Ken.

13. This story is a mixture of verifiable fact, hazy memory and baldfaced lies.

14. I did really once know a girl with keyhole eyes.

15. Keyhole eyes is an actual condition, known medically as colobama. Wikipedia says: “Coloboma is a hole in one of the structures of the eye, such as the lens, eyelid, iris, retina, choroid or optic disc. The hole is present from birth and can be caused when a gap called the choroid fissure between two structures in the eye, which is present early in development in the uterus, fails to close up completely before a child is born. The classical description in medical literature is of a key-hole shaped defect. A coloboma can occur in one or both eyes”.

16. Not everything you read on Wikipedia is necessarily true. 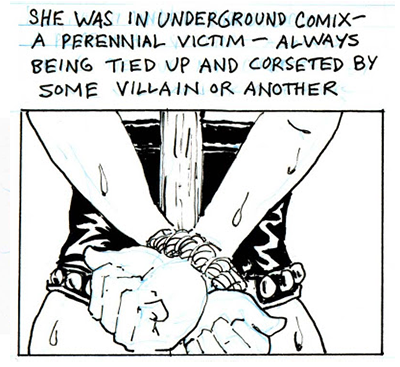 17. I did once hear a street preacher expound on the polar bear, but I can’t say when or where it was, let alone whether my girlfriend was with me.

19. The part about her becoming a postal worker is true, but the only person she killed was herself.

22. Some things I listened to while working on the 24 Hour Comic: The Complete Dinah Washington on Mercury, Volume 2 Disc One, part of the audiobook “The Widows of Eastwick” by John Updike, lectures by Alan Watts, inane chatter from my fellow artists about the merits of the Watchmen movie and inconsistencies in the DC Universe.

23. I threw in so many wordless panels near the end because I was running out of material and also because an artist named Jacob Mercy was engaging in this kind of asinine rivalry thing where he kept boasting about what page he was on and how he was going to finish ahead of me. Wordless panels are really quick to draw, especially when there’s nothing in them but a wheel on a metal track. I caught up to Mercy pretty darn fast.

24. In the end, Jacob Mercy finished twenty minutes ahead of me.