Yesterday, another of my old Modern Love column illustrations for the New York Times appeared with a podcast reading of the essay it originally illustrated. On this week’s podcast, the actor John Cho reads “Men Don’t Care About Weddings? Groomzilla Is Hurt,” about a groom who, in the process of planning his wedding, becomes a person he doesn’t recognize.


The essay by Craig Bridger, which originally appeared in 2006, riffs on the then-popular reality TV series Bridezillas– the name of course derived from the movie monster lizard Godzilla. It was a no-brainer to draw Godzilla in a tux. With hindsight, possibly I should have colored the scaly plates (or whatever they are) on his back green to match the rest of him.

I have a history with the character. Back in 1999, Seattle Weekly had me draw a Godzilla-ish Bill Gates for their cover (DID Microsoft go down in 1999? I don’t remember).

More recently, a Facebookfriend named Jerome T. Guerrero commissioned me to create a painting based on a dream he had as a child. In the dream, Jerome was Godzilla holding a photograph. He knew it was him/Godzilla because he could see the hands/paws holding the photograph. He was scraping away at the photograph and as he was scraping, it was revealing his own face. The commission was the image of Godzilla scrapping or melting away revealing child Jerome underneath.

Here is my first rough of the idea:

And here is the finished painting, which I think turned out particularly well: 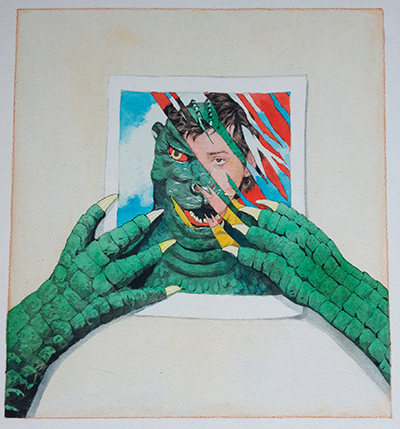 It now occurs to me that I have buried the lede, which should be: I DO PRIVATE COMMISSIONS!