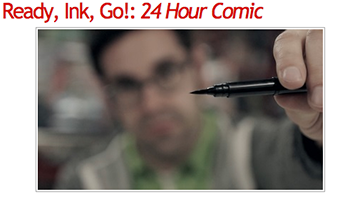 I just read a very favorable and flattering review of the documentary 24 HOUR COMIC, in which I prominently appear, by Elias Savada on the website Film International. Money quote: “There’s also David Chelsea, sporting Harry Potter eyeglasses…. Chelsea’s self-referential idea for his day’s effort is to sketch a reality show comic book about the 24 hour comic event. With him as the host.” Savada also praises Milan Erceg’s direction, and the vivid screen presences of my fellow participants, including my daughter Rebecca. Read the full review here, and watch for news of more screenings and a wide release.