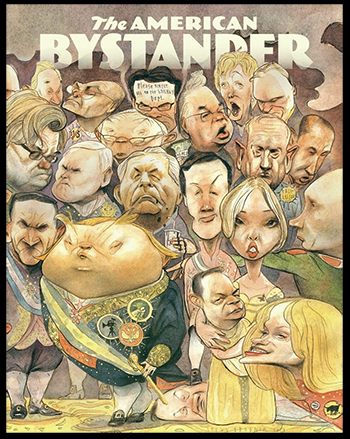 This past weekend, I got my copies of the latest issue of American Bystander in the mail. This issue of the recently launched humor magazine has contributions from comics gods Rick Geary, M. K. Brown, Frank Springer, Mimi Pond, Peter Kuper, Howard Cruse, and Shannon Wheeler, illustrations by Ron Barrett, Drew Friedman, and Roz Chast, gag cartoons by S. Gross, George Booth, and the late Jack Ziegler, an interview with Realist magazine founder Jack Krassner, and a beautiful wraparound cover depicting Trump and his court by Steve Brodner. I cannot recommend it highly enough, and that is not just because I happen to have work in it, an illustration for a humor piece by Steve Young about an Uber-like ambulance service.


Here is a work in progress series about my contribution, from my first batch of thumbnails to the final published piece: