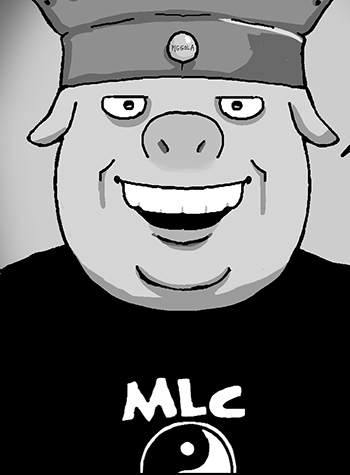 Last Friday, I put up another two page installment of my continuing webcomic about Reality TV, ARE YOU BEING WATCHED? on Patreon. This week we meet our three celebrity judges who will decide who is this week’s winner, and who will be eliminated on the 24 Hour Comic Reality TV show hosted by Eisner-award nominated graphic novelist and perspective expert David Chelsea:

Devoted David Chelsea fans will recognize The Virgin Valkyrie from her appearance in my 24 Hour Comic THE GIRL WITH THE KEYHOLE EYES, which was later turned into a full-color story for Dark Horse Presents. Extra-devoted fans will recognize Piggola, a character I first drew as a pre-teen, who had a short run in the 1970s with his own strip in The Portland Scribe:

I also posted a Piggola comic from a 1970s sketchbook on my Patreon page two years ago: 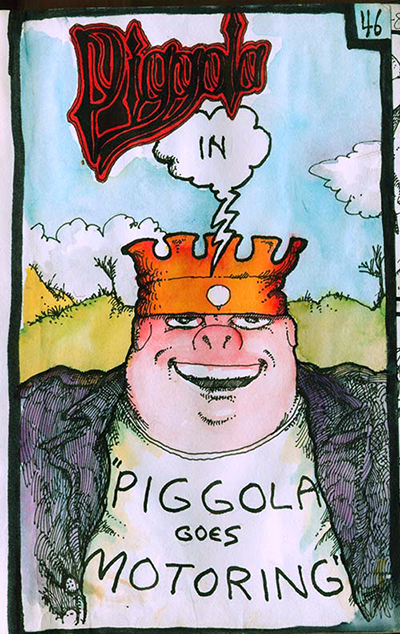 More inside baseball: alert readers will recognize that Piggola is wearing a T-shirt from the Metropolitan Learning Center, where I went to school from fifth to 12th grade (appropriately so, as my friends Will Spray, Tim Hill and I drew the first Piggola comics in the basement art room there). The school insignia has been the Yin-Yang since it opened in 1968, and just lately that venerable symbol has become embroiled in controversy. An “Equity Team” of students find its use to be an instance of “cultural appropriation” because this is a symbol belonging to the Taoist religion- though Portland has no Taoist temples, and no actual Taoist has stepped forward to protest personally. The whole thing is a bit of a Portlandia sketch, on a level with the Portland taco cart that recently had to close because of threats from PC protesters who objected to two white women cooking a recipe they had stolen from indigenous Mexicans. Still, as an alumnus, I am inclined to defer to people presently involved in the school, and truth to tell I was never a big fan- MLC’s use of the symbol always reeked to me of 60s dilettantism, and with the changes in cultural etiquette it seems even more dated and embarrassing, like a once-cool but now politically incorrect tattoo adorning an old hippie’s bicep. I say let the present generation pick its own symbol.

Here is some old school MLC nostalgia- a flyer I drew for a party celebrating the school’s 20th anniversary in 1989, which some unimaginative person recycled for the 35th anniversary 15 years later. This kind of rankled me, because I had designed the two figures on the flyer to be wearing 1968 and 1989 fashions respectively, and this made no sense at all in 2004. My thought at the time: doesn’t MLC have any younger poster artists?: 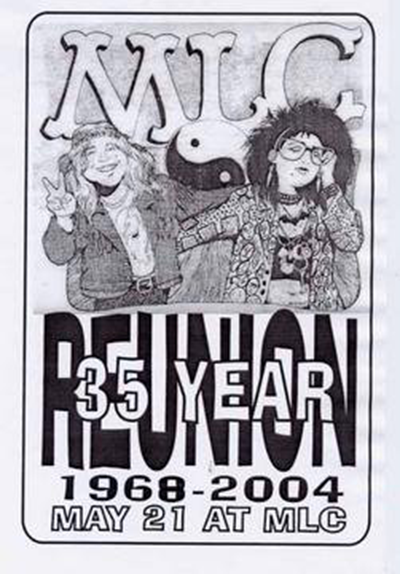 A word of explanation on the dates that don’t line up– blame the unfathomable academic custom of straddling two calendar years in every school year. I had originally written in 1969 as the starting date, because that was when the first senior class graduated, and the event was to be held 20 years later in 1989. However, whoever was in charge of the event insisted that the school had actually begun the previous fall in 1968, and therefore that date should appear on the flyer. I trust that this was not a math teacher. Naturally, the error persisted when the flyer was recycled 15 years later, because tradition.

There will be a meeting tonight, Monday, June 5, at the Metropolitan Learning Center to determine the fate of the Yin-Yang symbol. I can’t attend, but I expect that I will hear all about it on Facebook.