By happy coincidence, yesterday I also posted the final installment of my continuing webcomic about Reality TV, ARE YOU BEING WATCHED? on my Patreon page. This very definitely ties in with the film, because in it I am shown drawing what turned out to be an early draft of the comic. All in all, an eventful day.

Not to spoil too much, but in the final panel our protagonist Mugg shares a couch with the girl of his dreams Mandy, as they watch the premiere of a Reality TV show in which the participants draw (what else) a 24 hour comic!: 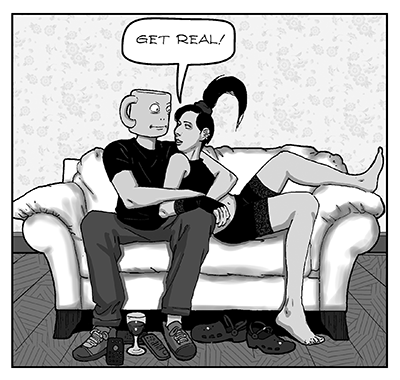 Also posted yesterday on Patreon: another six page installment of the mid-1980s early draft of my first graphic novel DAVID CHELSEA IN LOVE. In this installment, love does not run smooth for David and his then-girlfriend Minnie. We seem to have a failure to communicate: 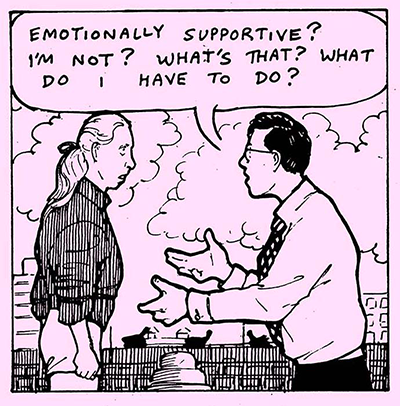 One reason I didn’t continue in an autobiographical vein after DAVID CHELSEA IN LOVE was that every woman I’ve been involved with since, including my wife, has made me promise not to do a number on her like I did on Minnie. Another is that I decided at some point that drawing myself as a character in autobiographical comics was false to my own experience, which I had not viewed through the eyes of a spectator standing to the side. Accordingly, when I draw comics about my life now, everything is seen as if through my eyes, a limitation which makes it hard to tell a story dramatically. The 24 Hour Comic THE GIRL WITH THE KEYHOLE EYES (later redrawn in color for DARK HORSE PRESENTS) is the longest story I’ve drawn using this method.

I do still draw myself- a lot- but when I appear as the perspective wizard in my instructional books or as the devil in ARE YOU BEING WATCHED?, I am more like an actor playing a part than “myself”, even when the character I am playing is named “David Chelsea”: