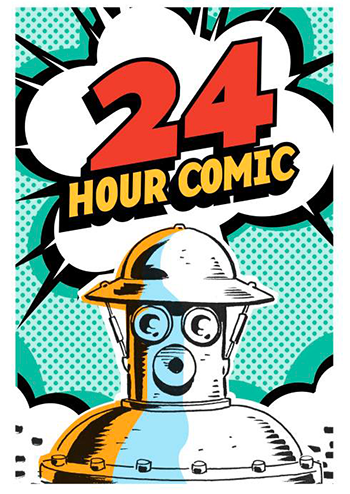 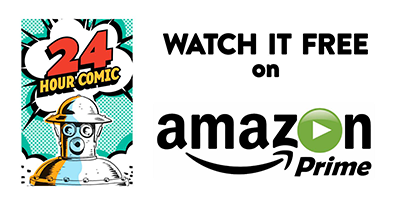 Though it costs $0 on Prime, your views are still hugely beneficial to the film. If you’ve already seen the film, here’s some additional great uses for playing the film on Prime…

1) Deter thieves from breaking in by making it seem like someone is home.

2) Keep lonely plants and furniture entertained while you’re away.

3) Use it as a screen saver to prevent screen burn.

Another huge thanks to everyone that has been supporting the film. Because of you, this film has had great opportunities, and hopefully more in the future!”

24 Hour Comic is a documentary in which I appear, which had its theatrical premiere this June. In the film, 8 Artists confined to a comic book store partake in Scott McCloud’s 24 Hour Comic Challenge. Each attempting to write, draw, and complete a 24 page comic in 24 hours. The film is the debut feature from filmmaker Milan Erceg, and features, among others, Paul Guinan, Rachel Nabors, Sera Stanton (now known as Opal Pence), Jacob Mercy, Pete Soloway, and Tom Lechner, and also has some delightful footage of my daughter Rebecca at 13, making her first attempt at a 24. Special guest appearance by comics guru Scott McCloud!

In case you don’t know it, Amazon Prime is the video streaming service that carries Transparent and The Wire, along with most the good movies you can’t find on Netflix anymore. Can Netflix be far behind?