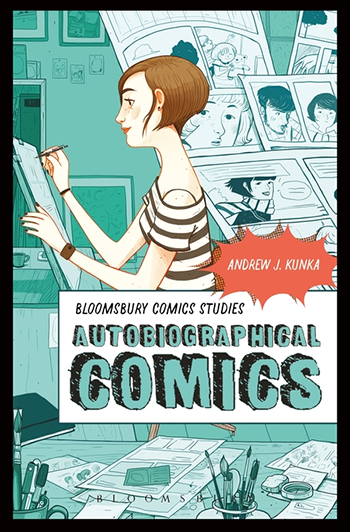 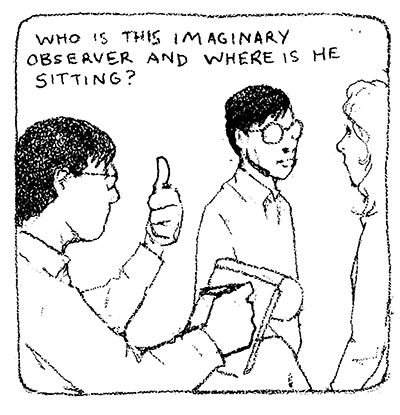 This sequence is followed by “Appendix 4”, which consists of four pages from AUTOBIOGRAPHICAL CONVERSATIONS, a 2013 comic drawn by Ryan Claytor, in which a character representing Claytor, in conversation with another representing San Diego State University professor Dr. Harry Polkinhorn, rejects my argument, and defends the conventional comics practice of including a character representing the author within the panel. This, by the way, took me completely by surprise. I had never heard of Claytor’s comic, and had no idea it would be included in the book.

You may expect me to be offended by Claytor’s rejection of my argument, but really I’m not, and I’ll tell you why: I wasn’t entirely serious.

To back up a bit, let me tell you about the moment the whole argument occurred to me. It was when I was reading an interview in THE COMICS JOURNAL, which is the closest thing the comics industry has to an intellectual journal along the lines of FILM COMMENT or THE NEW YORK REVIEW OF BOOKS. I forget the name of the artist who was being interviewed, but he was making a point about the difference between first, second, and third person in writing, and as part of the point he was making, stated that there was “no equivalent in art” for the first person. My immediate reaction was “THAT’S NOT RIGHT! The equivalent to first person is subjective camera!” (If this had been a few years later, I might have said “first person shooter” instead).

Contrary to that unnamed artist’s assertion, I reasoned that a story drawn from the point of view of the central character exactly corresponds to one told in the first person, and it follows logically that an autobiographical comic should be drawn that way, just as an autobiography is invariably written in the first person. Imagine if Richard Nixon had begun his autobiography with a line like “He was born in a house his father built.” My thought was that it is equally odd for an autobiographical cartoonist to draw his or herself in the panel, as if observed by a third person.

Of course, what is most logical is not necessarily the best way to tell a story, and I did not, for example, rush out to redraw the previously published DAVID CHELSEA IN LOVE from my own point of view. Claytor, in his story, quotes from a writer named Charles Hatfield: “Seeing the protagonist or narrator, in the context of other characters and objects evoked in the drawings, objectifies him or her. Thus, the cartoonist projects his or her inward sense of self, achieving at once a sense of intimacy and a critical distance.” Claytor is unwilling to give up that critical distance, and insists on preserving his double identity as both artist and cartoon protagonist. I concede as much in the last line of the excerpt reprinted in the book: “I can understand it- autobiographical cartoonists don’t want to live life over exactly- this time they want better seats!”

Despite the provocative title EVERYBODY GETS IT WRONG!, my aim in drawing the story was more modest: to get autobiographical cartoonists to think harder about what strategies they use to tell their own stories, and to put another tool in their arsenals. I am actually immensely flattered that Ryan Claytor saw my story and felt the need to respond.

Looking back on the way I drew my own autobiographical comic DAVID CHELSEA IN LOVE, I can see things I might have done differently if I had been more aware of subjective camera as a possibility. I did use it for comic effect on one page where a sulking “David” is peeved at a roommate who has rejected his pass, and decides to retaliate by not looking at her: 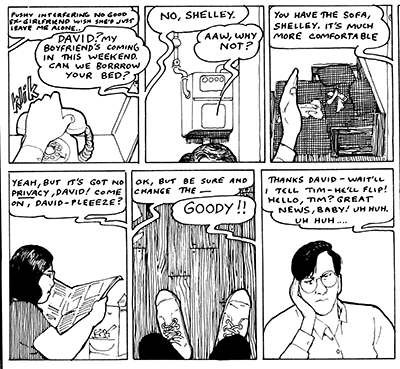 I might have made more use of it, even popping inside the heads of other characters to show the scene from their eyes.

There is also a disembodied interlocutor which pops up at a few moments to interrogate David (and even, at one point, his girlfriend Minnie). I used this device sporadically, without thinking much about it, but clearly this is none other than the artist himself, looking back with eight years of critical distance at his earlier self. If I had been more aware of what I was doing I might have made this more obvious, possibly pulling out at times to show the page on the drawing board, surrounded by drawing tools, all from the subjective camera viewpoint of my present-day self.

I’m going to go out on a limb and suggest where a subjective camera strategy might have worked in another autobiographical comic. Chester Brown’s THE PLAYBOY is a coming of age story, published in 1992, recounting the adolescent Chester’s history of “reading” (mostly jerking off to) the magazine PLAYBOY, and his guilt over it. Brown literalizes a present-day perspective on his own past by introducing a winged alter-ego who flies above his adolescent self, and occasionally interacts with him. To my mind, this adds an oddly Tinkerbelle-like note to what is otherwise a very soberly told story, and it might have been more in keeping with the story’s tone for the present-day Brown to remain off-camera, and show the adolescent Brown through his eyes. (I don’t know if Brown considered this approach and rejected it, but he clearly didn’t have the benefit of reading EVERYBODY GETS IT WRONG!, which didn’t appear in print until 2008). 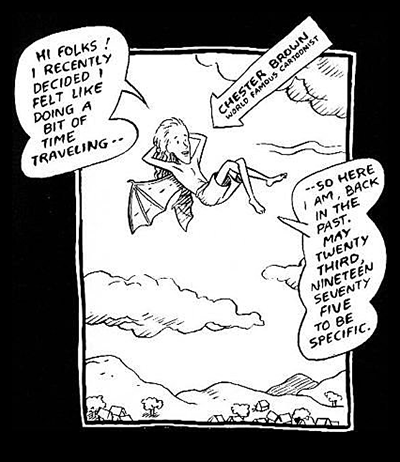 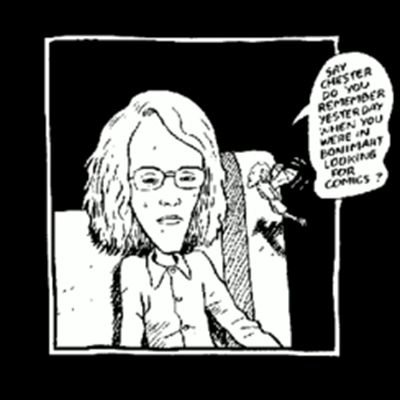 In the years since I drew EVERYBODY GETS IT WRONG!, it does not seem that autobiographical cartoonists have been following my lead. On the other hand, subjective camera has become default mode in video games: 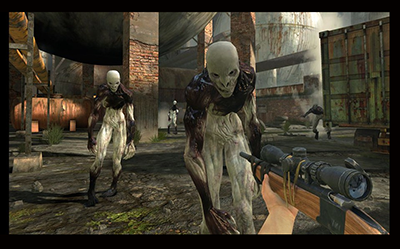 I have continued to draw myself as a character in contexts that are not autobiography, as the perspective expert schooling the art student Mugg in instructional books, and as a devil tempting the lovelorn Mugg in my webcomic ARE YOU BEING WATCHED? I have also drawn two longish autobiographical stories, THE GIRL WITH THE KEYHOLE EYES (originally a 24 Hour Comic, later redrawn in color for DARK HORSE PRESENTS), and ROUND BLACK GLASSES (my most recent 24 Hour Comic, currently serializing on Patreon). In both of these stories I have tried to stick as closely as possible to telling them entirely subjective camera, which has been an education in both the possibilities and limitations of this method.

Both stories end up rather undramatic, more like mini-documentaries about my life than acted-out stories. The story is told mainly in captions, with only occasional bits of dialogue (and the subjective camera David hardly speaks at all):

For ROUND BLACK GLASSES, which is after all about my personal appearance, I couldn’t get away with not showing myself AT ALL, but I solved that problem with the occasional mirror shot: 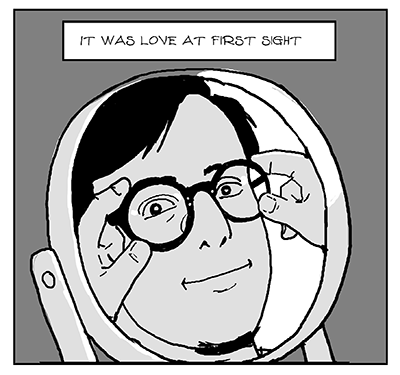 All of which may leave Ryan Claytor with the better end of the argument. Nonetheless, I plan to persist in trying to tell stories through my own eyes when I can. And I am conceding no ground on the part of my argument that AUTOBIOGRAPHICAL COMICS choose not to reprint, about how dream strips should be drawn subjective camera. Perhaps I will get into that in a future post.

Want to know what all the fuss is about? Click this link to order AUTOBIOGRAPHICAL COMICS, by Andrew J. Kunka:

Read EVERYBODY GETS IT WRONG!, the title story in my first collection of 24 Hour Comics:

Read THE GIRL WITH THE KEYHOLE EYES (the 24 Hour Comic) in Sleepless and Other Stories: David Chelsea’s 24-Hour Comics Volume 2:

Read the book that started it all! DAVID CHELSEA IN LOVE:

Read the first four installments of ROUND BLACK GLASSES on Patreon: