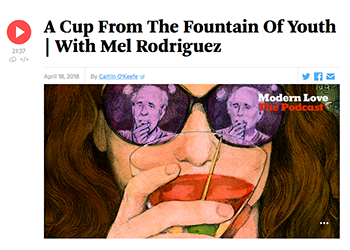 The Modern Love Podcast has recycled another of my illustrations from the New York Times column. In this week’s podcast, actor Mel Rodriguez reads “A Cup From The Fountain Of Youth,” a 2007 essay by animator and video editor Andy Christie.


When the Times decides to reuse an illustration they usually ask for a high-resolution image file, and I usually have to hunt for it on an old disc. This time I came up empty- apparently there were a few months of work that I had saved to zip discs (it was 2007) that I had not burned to CD. So I had to go on ANOTHER hunt through boxes of original art to find the old pieces to scan again. “Pieces” because each of my illustrations for the column was a combination of two pieces of art sandwiched together in Photoshop: a pencil drawing on coquille board, and a painting on watercolor paper. This sequence shows both elements along with the finished result:

And after all that work, they wound up cropping it down to a narrow strip (see top image).