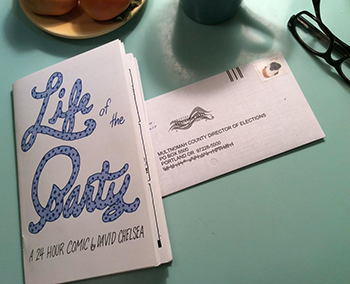 Saturday, October 6th 2018 was 24 Hour Comic Day, and just like last year, I drew my comic (my 19th!) at Enthusiasm Collective from 9 am Saturday to 9 am Sunday. Given the (in my opinion) absolute necessity of electing a Democratic Congress this November, I made my comic a benefit for the Democratic Congressional Campaign Committee. Much like my S. Clay Wilson benefit in 2009, I took pledges for a specified dollar amount for each page completed (as usual, I hit it on the nose with 24). I collected seven pledges before the event, for a grand total of $289. Presumably, the DCCC will spend the money on a lot of ads with creepy music and a gravelly voiceover saying stuff like “Walter Wunkett SAYS he cares about people with pre-existing conditions, but he voted against the Affordable Care Act EIGHTY ONE TIMES!” The seven people who pledged each received a print copy of the completed comic.

David Chelsea is reading: The Confidence Game: Why We Fall for It . . . Every Time
by Maria Konnikova


Appropriately enough, this story has a political angle. Titled LIFE OF THE PARTY, and written in the form of a letter to former Senator Al Franken, it mingles a biography of my father Dick Celsi, longtime Democratic Party volunteer and onetime Chair of the Oregon State Party, with my own ambivalent history as a mostly Democratic voter, also touching on the career highlights of Franken including his final fall from grace. 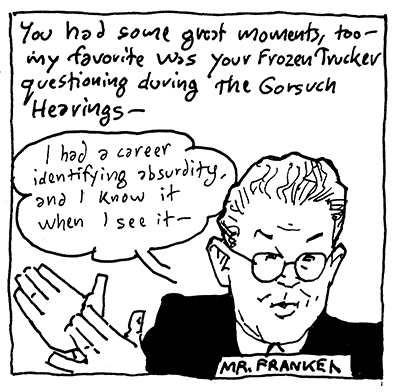 Even though the challenge part is over, it’s not too late to pledge! I will be collecting today and tomorrow, Election Day ONLY (afterwards, I figure it will be kind of pointless). Pledgers will receive a print copy of the completed comic. I usually post all my 24 Hour Comics on Patreon, but just to keep things nice and exclusive, I have ONLY made this one available to those who have pledged (the story may eventually be included in a future collection of my 24 Hour Comics, but that would be YEARS away). Since time is short, please do not send your contribution to me, but send a check directly to the DCCC at

Early pledges were in some multiple of 24, but this is not obligatory. You can give any amount you can afford.

Then, reply to me via the contact link with your address, and a promise on your sacred honor that you have made a contribution, and I will be happy to send you either a hard copy of LIFE OF THE PARTY, or a digital file if you prefer. 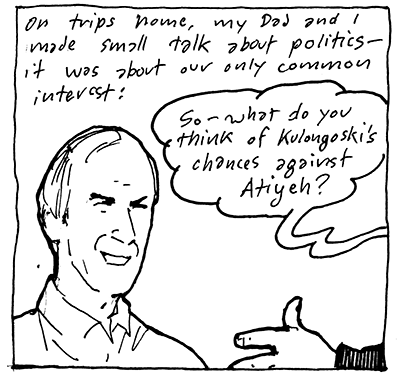 Here are some reviews of the story from people who have pledged:

“The 2018 version of David Chelsea’s 24-Hour Comic is a fun look into his youth and the formation of his political leanings due, in part, to his father’s influence. David prepared the comic as a “love letter” to former US Senator Al Franken in order to tell this story. “Life of the Party” provides information that even I, a somewhat educated voter, did not know about the history of Democratic Presidential candidates. David’s father, a staunch Democrat, was unsuccessful in his bids for higher office, but definitely made an impression on David. The words are heartfelt, and the drawings bring the story to life in an engaging way. I stand firmly with David in his quest to help elect Democrats in the upcoming midterms, but I must say that I’m not sure that “any blue will do.” However, as David points out, “once our crowd is in power, we can have the luxury of calling for ideological purity”; I suppose I can get on board with that. Considering that David put this together with zero sleep over 24 hours, it is very impressive, and I believe that he slept the whole of the following day. VOTE BLUE!”

“When David Chelsea asked for sponsors to donate to the Democratic Congressional Campaigns in exchange for his upcoming (and now rendered 24 hour comic) I jumped at the chance. I want to help the Democrats take the House anyhow, and supporting one of my favorite artists is a bonus. I just got my comic and, as usual from David, it’s entertaining. Unexpectedly, David has a family tie with the Democratic campaign, in that David’s father was a grass roots Democratic activist from the 1960s until his death in 1991. So it weaves David’s and his dad’s story with a letter to Al Franken. It’s a good read and a good cause. Make you donation while there’s still time to campaign, and save a half hour to read David’s latest work.”

David Chelsea has summed up his personal connection to the democratic party through the lens of his father, Dick Celsi, a long-time party mover in Oregon. Having lived in the state for all my life, I can honestly tell you that the Celsi name is as close to party royalty as one can get in the in the State’s party leadership. Not a, successfully elected Politician himself, Dick rose to lead the state party and faithfully represent what Democrats everywhere should believe in. Written as a letter to Al Franken using the graphic novel format, Chelsea illustrates a brief history of the Democratic party from Kennedy through Obama. All this was done during a 24 hour period in 24 pages, and 144 frames. (BTW, Chelsea’s drawing abilities are in great form as each of the people he portrays in simple black ink line drawings are quite recognizable which makes this comic even more fun to read.) 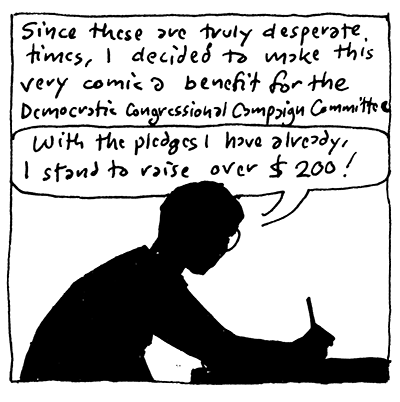 I realize that many of you have already contributed, but I hope you can give a little more at this crucial late hour. I thank you for your very kind attention.