If you’ve been following these posts, you know that I’ve been acquiring chops little by little in Adobe After Effects. Well, I now feel adept enough to have launched a series of animated videos about something I was already good at- perspective. The first in my series of step-by-step perspective tutorials dropped on Patreon in May, and as of now, I have posted three of them:

Drawing Perspective with David Chelsea: A Hexagonal Floor In Perspective 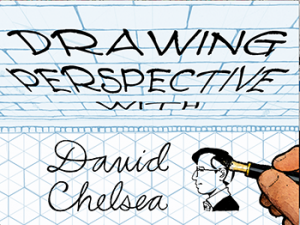 You will notice that if you try to click on the links, only the first opens easily. That is because I have sequestered them behind a Patreon paywall in hopes I can monetize my perspective expertise. I have two kids in college! My plan is to post a new video every two weeks- first, to subscribers at the $4.99 a mouth level and above, and after two weeks, to anyone pledging more than $0.99 a month. The first one’s free! 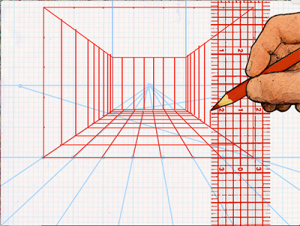 Rather than add verbal instructions, I decided to stick to wordless demonstrations, which I’m hoping will transcend language barriers. I am particularly proud of the second video in the series, which shows how to construct perspective around a reference photo. I own several books of figure reference photos which have been useful to me over the years, but one of my pet peeves about them is that the models are invariably posed against blank white backgrounds, which are no help at all if you want to put your figure into a perspective scene. The Art Pose series at least puts its models on circular turntables, which provide a little in the way of perspective cues. To start with, I guess at the eye level, place the horizon accordingly, then build a square in perspective around the turntable, which I then expand into a tiled floor. 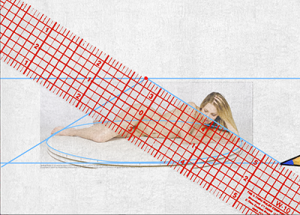 Each video follows the same pattern- I begin by drawing a horizon and vanishing points in blue pencil, add further details in red and green, then finish the drawing in ink, and finally erase my pencil work and blow the shavings away (all digitally simulated, but you should have no trouble following along on paper). 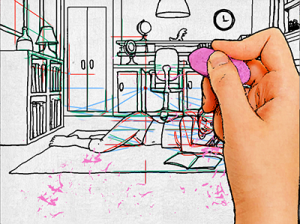 I’ll be blogging more regularly about further videos as I post them. In the meantime, you can check out some of my other After Effects projects:

ARE YOU BEING WATCHED? The Promo

Round Black Glasses: The Morph