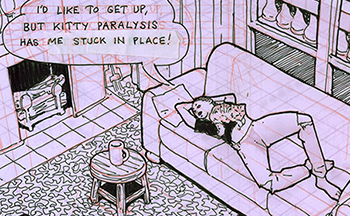 I haven’t been doing much commissioned work recently, but I’ve been plugging away nonetheless, posting comics, videos, and sketchbook pages to my Patreon on a regular basis. On any given week I might post a book report comic drawn on a library call slip, like this one about Sarah Polley’s memoir:

Or new pages of the dream comic I’ve been working on since early in 2020:

I had kind of tapered off on new Snow Angel stories, but I did draw a new one for the holidays last winter: 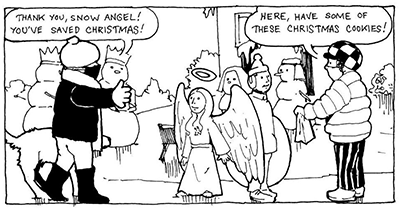 I have been diligent about keeping up my two week schedule of perspective instruction videos, and lately I’ve been moving that project into a new phase, a series showing how to draw human figures in perspective. What started me on this was dissatisfaction with existing reference books for the human figure. There are a number of competing versions of these, usually consisting of nude models in typical art poses, often photographed from a variety of angles:

What bothers me is the very minimal or even utterly blank backgrounds to these photographs. The artist has very detailed reference for drawing the figure, but no guidance at all for how to convincingly place that figure into an environment drawn in accurate perspective. I want to provide that guidance. 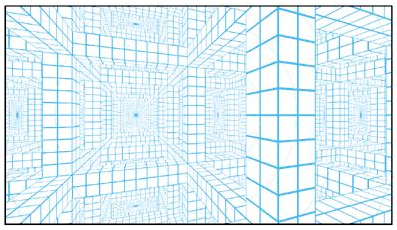 My second perspective book included a disc of CG perspective grids intended as guides for artists. My aim is to make these even more useful by including realistic human figures within the scene. What sparked my beginning the project in earnest was a Christmas gift from my daughter Rebecca: Nomad, a sculpting app that works on the iPad. Since then I’ve been creating human figures using many of those poses from books as reference.

It’s been a steep learning curve, but I’m pleased with my progress. Because I am not limited by the physical limits of photographing a live model, I can create views from a wider choice of angles, even removing the floor to obtain views from directly underneath.

As a demonstration, I’ve been posting Random Haiku comics drawn over hard copies on Patreon: 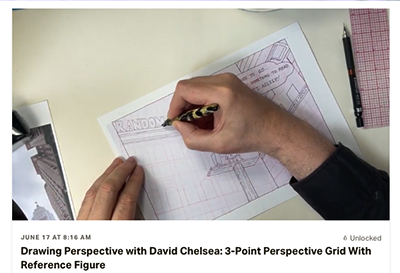 I have just now begun another video series, running the footage from my drawing demonstration at actual speed, with commentary from me and one or more fellow artists. My first guests were graphic novelist Joshua Kemble and two of his cartoonist friends, but I plan to invite others on soon:

I’m not sure how far I’m going to take this project, but the Random Haiku comics have been getting a good response so far from my friends on Facebook. The core of this project are the reference grids and video demonstrations, which I hope will be used by working professionals as well as novices. The figure renderings and perspective videos are behind a paywall, but the comics I’ve drawn over renderings are posted free:

Other comics series on Patreon:

If you’re feeling flush, sign up as a supporter and see all the stuff that’s behind a paywall, including sketchbook pages, work in progress, and all the most recent perspective videos!