There’s been a bit of a change of plan- or more like a total collapse of plan- since the last time I posted about this project, three paintings in spherical perspective on bowling balls created to be auctioned online by Space Object Gallery. Their curator, Mary Wright, died last weekend. My condolences go out to her family and friends (I myself never met Mary- we corresponded entirely by e-mail).

David Chelsea is reading:
Swindled: The Dark History of Food Fraud, from Poisoned Candy to Counterfeit Coffee
by Bee Wilson

END_OF_DOCUMENT_TOKEN_TO_BE_REPLACED

So here’s what I did at last weekend’s Stumptown Comics Fest. I sold some comics:

David Chelsea is listening to:
Where Good Ideas Come From: The Natural History of Innovation
by Steven Johnson

END_OF_DOCUMENT_TOKEN_TO_BE_REPLACED

Here’s part of the presentation I gave last Saturday at Stumptown Comics Fest:

My fellow cartoonist John Linton Roberson brought this one to my attention. It comes from a comic called Flashpoint: Legion of Doom #1, published by DC in 2011. (Superhero comics, like animated cartoons, are a group effort. The credited artists for this panel are Rodney Buchemi, José Marzan, Jr. and Artur Fujita.)

David Chelsea is reading:
Gulp: Adventures on the Alimentary Canal
by Mary Roach

END_OF_DOCUMENT_TOKEN_TO_BE_REPLACED

This year at Stumptown Comics Fest I’ll be presenting something new. Rather than the tried-and-true perspective drawing grid slideshow and demonstration that I have presented two years running, I am doing a slide show version of my irregular blog feature Perspective Police! in which I analyze published drawings by artists like Joost Swarte, Ivan Brunetti, and Alison Bechdel, and propose revisions to better bring them in line with perspective. Not that I am free from error myself; one of the images I police is an early illustration by a promising young artist named David Celsi.

END_OF_DOCUMENT_TOKEN_TO_BE_REPLACED

I had a perfectly swell time at Stumptown Comics Fest last weekend, signing my books, passing out copies of The Survey and chatting with friends and fans. But don’t take my word for it, check out this time lapse video of Stumptown Day One. I can be seen front and center, next to the big red screen, wearing a black vest. Don’t I look like someone having a good time?

END_OF_DOCUMENT_TOKEN_TO_BE_REPLACED

I had a chance to pass out copies of The Survey to attendees at Stumptown Comics Fest last weekend, and the results are somewhat surprising. I was expecting the overwhelming popularity of superhero comics to be reflected in the voting, but actually Superhero ended up in a three-way tie with Pirate and Humor for fourth place in the Genre category, behind Fantasy, Sci-Fi and History. Least-liked genre? Funny Animals.

David Chelsea is watching:
The Descendants
with George Clooney

END_OF_DOCUMENT_TOKEN_TO_BE_REPLACED

It’s very early days on The Survey, my new project to pick the brain of the great comics buying public by polling readers on what kind of stories they most want to see, in which style, even down to details of lettering and coloring technique. Based on their answers, I will produce two stories- one, assembled from elements that respondents say they most want to see, the other featuring the qualities they least want to see. (Full disclosure: I was inspired by Komar and Melamid’s People’s Choice painting project, in which they commissioned a poll to determine what qualities people most wanted and did not want in a painting, and then created two paintings with just those qualities.) In case you missed my previous post about it, here is The Survey:
END_OF_DOCUMENT_TOKEN_TO_BE_REPLACED 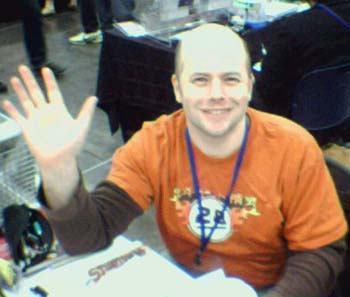 I have been too busy compiling data from The Survey to write a blog post about last weekend’s Stumptown Comics Fest, but here are some pictures I took with my Palm Pilot:

END_OF_DOCUMENT_TOKEN_TO_BE_REPLACED

This is a momentous blog post, for I have the honor of announcing the birth of a new art form: Immersive Comics. The parents are a bit of a May-December match: the venerable comic strip, which first appeared in newspapers over a century ago, but may be far older (Scott McCloud, for one, dates its first appearance to Ancient Egypt), and the immersive panorama, which has its roots in wide-angle photography, but only took on its modern form with the development of online photo sites in the 21st Century.

END_OF_DOCUMENT_TOKEN_TO_BE_REPLACED

I’m not planning on doing anything radically different at this year’s Stumptown Comics Fest, which is happening this Saturday and Sunday here in Portland. I’ll be selling books, among them my latest, Extreme Perspective! published by Watson-Guptill, taking pictures with my Palm Pilot (like this 2008 shot of Peter Bagge, who I think will be back this year), sketching during downtime, visiting with friends, maybe taking in a panel or two. At 1 pm on Saturday I’ll be doing pretty much the same perspective presentation I did last year.

David Chelsea is reading:
The Hoarder in You: How to Live a Happier, Healthier, Uncluttered Life
by Robin Zasio